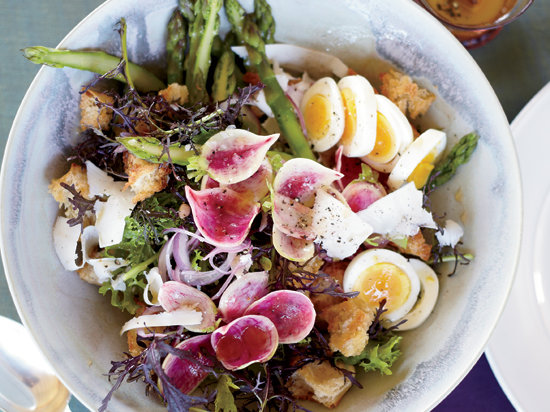 Recipes for panzanella (a Florentine bread salad popular in the summer) typically call for tomatoes, but in the spring, Mike Lata prefers using seasonal ingredients like asparagus and radishes.

Grilling the bread for this panzanella (bread salad) adds a slight smokiness and crunch. Marinate the tomatoes ahead of time so all you have to do is grill the bread and assemble the salad to serve.

Like many restaurant chefs, Michael White “shocks” fresh vegetables to make them supercrisp by submerging them briefly in an ice-water bath. For the panzanella (Italian bread salad) here, don’t bother shocking the fennel. Simply toss it with tomatoes, peppers and pieces of grilled ciabatta bread just before you’re ready to serve the steak.

This dish of seared fish on a bed of corn, peppers, tomatoes and herbs mixed with lump crab and croutons is the epitome of summer.

This bread salad is bursting with summery flavors: sweet peaches, ripe tomatoes, creamy mozzarella, and fragrant mint and basil–all served with crunchy ciabatta croutons. Panzanella originally comes from Tuscany. It’s usually a simple salad made with tomatoes and stale bread. I like to grill the bread in a griddle pan, to add a smoky dimension to the salad. The bread will soak up some of the lovely dressing, while still retaining a bit of crunch

This rustic salad is used to rescue stale bread. Very fresh tomatoes, cucumber and bell pepper are the heroes here

Panzanella, the Italian salad, is typically made with tomatoes, onions and chunks of bread. In her smart version, Koren Grieveson combines grilled bread and sweet broiled tomatoes with marinated baby artichokes before dressing the warm salad with a lemony vinaigrette. It’s fabulous served alongside crisp chicken.

Bread Salad with Tomatoes and Olives

Salvatore Denaro makes a panzanella that’s quite different from the typical summer bread salad served at other trattorias in Umbria. His zesty version includes southern Italian green olives, dried oregano and whole-grain barley rolls from Puglia called friselle. Any good, grainy, country-style loaf works nicely in this recipe; just make sure it’s pane raffermo, what the Italians call bread that is “firmed up” and quite stale.

Chef Paul Kahan of The Publican in Chicago has a great trick for heightening the flavor of duck breasts: He ages them on the bone in the refrigerator for up to 1 week. Boneless duck breasts can be aged using the same method, although the results won’t be as dramatic; if you’re short on time, use unaged duck.

Toasted Panzanella with Tomato and Fennel

Traditional panzanella is made by soaking rock-hard pieces of stale bread in ice water and squeezing them dry, then tossing them with chunks of tomato in a vinaigrette. Instead, Michael Romano creates a crouton-based version by cutting day-old bread into cubes, coating them with olive oil and toasting them. The bread goes from wonderfully crisp to satisfyingly chewy as it soaks up the succulent juices and tangy dressing.

The smart idea here from F&W’s Kay Chun is to pair crisp salmon with a warm, smoky eggplant salad that’s tossed with cubes of sesame bread.

Erik Anderson created this bread salad using Wonder bread and dill pickles, which always accompany classic Nashville hot chicken. He serves it with The Catbird Seat’s spin on hot chicken as “a tribute to the city and proof that we don’t take ourselves too seriously.”

This main-course version of bread salad, interpreted through a California lens, includes shredded rotisserie chicken, strawberries, cilantro and toasted pumpkin seeds. “My husband, Evan, and I make wild fennel levain at Rich Table, and this is a delicious way to use up day-old bread,” says San Francisco chef Sarah Rich.

A classic Italian panzanella (bread salad) combines juicy tomatoes and bread cubes. Here, Chris Cosentino swaps in stone fruits like apricots and peaches for the tomatoes. Then he pushes the dessert over the top by dolloping the “salad” with an airy zabaglione, a frothy sauce of egg yolks whipped with sweet dessert wine.

“Grilling over an open flame is my favorite way of cooking,” says Charlie Parker. “It gives food so much flavor without the need for butter.” Here, he serves lightly charred broccoli and ciabatta cubes in a twist on an Italian bread-and-tomato salad.

This platter is a combination of warm, smoky, sweet, and bitter. The flavors and colors speak for themselves, and the addition of smoked ricotta is remarkable, says Karen Mordechai in her book Simple Fare: Spring and Summer

When Susan Going pays homage to the legendary chicken at Zuni Café in San Francisco, she confits the whole chicken in duck fat and serves it with a country white bread and fennel panzanella that’s spiked with lemon salsa and layered with wilted escarole.