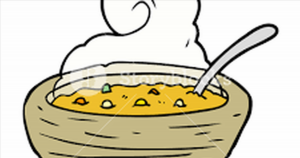 Clam Chowder may be as thick as pudding or thinner like gravy.