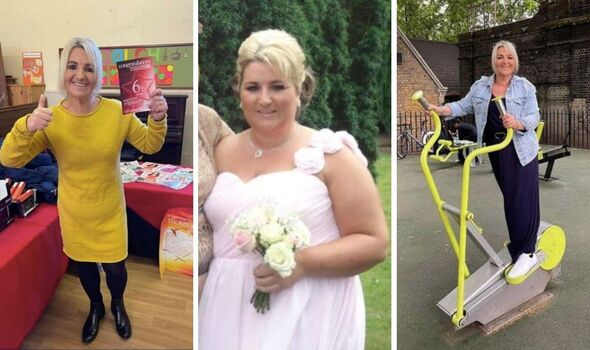 Sara Hennigan, 43, turned to food when she lost three close family members, causing her to put on an unhealthy amount of weight. But she was able to lose it again with help from Slimming World.

Sara was a healthy weight during her younger years and after giving birth to her to sons, now 20 and 24.

However, she slowly started gaining weight over the years due to not taking care of herself properly.

She explained: “I was always really busy, doing stuff for my family and the community.

“I didn’t leave any time for myself, I didn’t look after myself, and I slowly started gaining weight.”

This was worsened when Sara lost her mum to lung cancer in 2017, before tragedy struck again.

Her brother was diagnosed with the same lung cancer just one year later.

At her heaviest, the mum of two weighed 18st and at just 5ft 3in, she was considered morbidly obese.

She revealed: “Each night I took a big bottle of Fanta, a family bag of crisps and a family size chocolate bar to bed with me – I was eating for comfort.”

But inspired by the battle her mum had fought – and her brother was still fighting – Sara decided to lose weight once and for all.

The incentive was high: “They had done everything to hold on to their lives, yet I was just throwing mine away. I realised I had to change.”

Her “inspiration” was her brother John, who totally overhauled his life when he received his diagnosis.

In a bid to get well, he started eating more fish and white meat, cutting out all processed foods.

In Sara’s words, he “knew he was dying but still gave it his best shot”.

Sara’s weight loss journey began at Slimming World, which offers a weight loss programme centring around a healthy diet plan and moving the body more, with plenty of support at your fingertips.

But the road to weight loss was not easy, and the first time she went to attend a Slimming World meeting she couldn’t even go in.

Plagued with depression and physical pain in her hips and back, she found it difficult to get the ball rolling.

2021 was a particularly difficult year, with Sara’s brother and father both passing away and being diagnosed with cervical cancer herself (although now she is thankfully in the clear).

However, she used these tragedies to inspire her weight loss and once she decided to give it a go properly she “didn’t look back”.

She has since been named ‘Woman of the year’, ‘Biggest loser’ and ‘Miss Slinky’ on the programme.

Sara’s incredible 8st weight loss is down to her dedication in the kitchen and the gym, which she called a “game changer”, reported Manchester Evening News.

She even started up a community walking group for others hoping to become more active.

As for food, she swapped takeaways for healthier fakeaways, and she cut out sweets and cakes entirely, also ditching the family sized fizzy drinks.

Those struggling with depression can get in touch with mental health charities such as Mind or Samaritans.