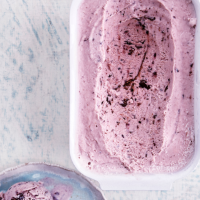 1. Put the cherries in a blender and pulse to chop roughly. Add the custard and condensed milk and pulse again until the cherries are chopped and the mixture is pale pink. (The fruit should still have texture.) Pour into a large mixing bowl.

2. Lightly whip the cream in a separate bowl, then, using a large metal spoon, fold into the cherry mixture, retaining as much air as possible. Spoon into a freezeproof container with a lid. Freeze for 3 hours or until firm at the edges, but soft in the middle.

3. Beat the ice cream well with a whisk, incorporating the frozen areas, until it is smooth again. Return to the freezer. Meanwhile, melt the chocolate in a heatproof bowl set over a pan of simmering water; leave to cool slightly.

4. Using a fork, drizzle ½ the chocolate over the softly frozen ice cream, making a mass of fine lines over the surface. Carefully fold in the hardened chocolate strands and repeat the process with the remaining chocolate; cover. Return the ice cream to the freezer and leave to firm up for at least 3 hours or overnight.