Meghan Markle, the Duchess of Sussex, looked lean and lithe in the Instagram video.

The 5ft 7” Duchess of Sussex wore a chic get up for the shooting session.

She wrapped her legs in indigo denim skinny jeans. On her feet were nude heels.

On her torso the Duchess wore an oversized blue and white pin stripe mens shirt.

Her dark hair was brushed smooth and hung long over her shoulders and back.

The video posted to Meghan and Prince Harry’s Instagram today revealed the nature of the charity project.

It read: “A sneak peek at the new @smartworks charity capsule collection shoot ahead of the autumn launch.

“An initiative supporting the Smart Works collective which will equip women entering the workforce with the work essentials they need.”

Smart Works is a British charity that provides interview clothes and training to unemployed women on need support.

In one part of the video Meghan appears to be looking at pictures of herself modelling clothes on the screen before she beams and claps with excitement.

The exact nature of the charity initiative is not known. The charity may be selling the clothes created with the Duchess to the public to raise money. Or the clothes may be donated to needy women, or both.

However, it appears the Duchess is taking part in a hands on way. 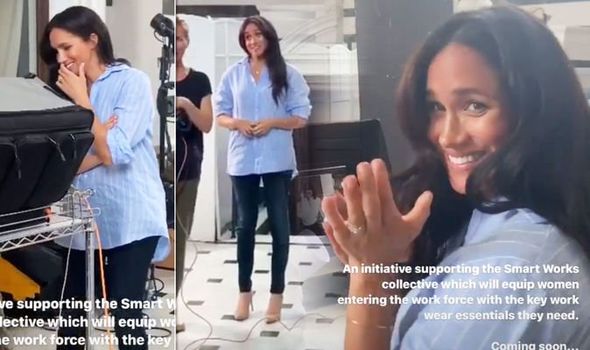 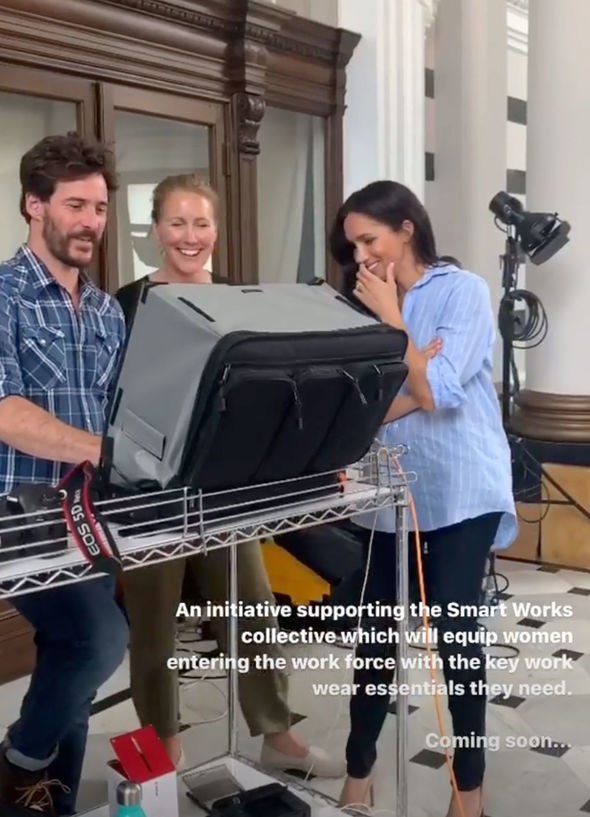 She appears to be styling the clothes on women in the Instagram video.

Meghan looked very slim in the video as she met guests and took creative control. What does the Duchess eat?

The former-actress told website The New Potato all about her typical daily menu, and it includes wine at lunch.

Dinner: Seafood and pasta and a Negroni 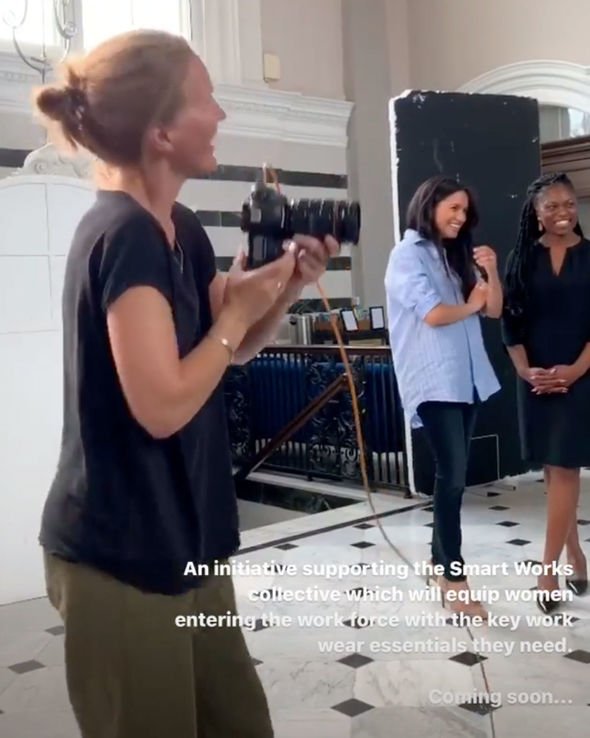 Recently Meghan’s fans took to Twitter to hit back after Meghan Markle’s weight was criticised by some on the platform. Lambasting criticism, another wrote: “I’ve seen many tweets about her weight etc but good on Meghan for being comfortable in her own post baby body, she looks incredible. So pleased she’s enjoying herself and her family rather than worried about her body.”

How long does it take to lose baby weight?

The Institute of Medicine recommends that women within a healthy weight range gain between 25 to 35 pounds during pregnancy.

One study found that women retained an average of 1 to 6.6 pounds of their pregnancy weight gain after 12 months.

Another study of 831 women found that 40.3 per cent kept more than 5.5 pounds of the weight they had gained during pregnancy.

Who is Meghan Markle? Quick profile

Her father was previously married to Roslyn Loveless and Meghan has two elder half sibling – sister Samantha Markle and brother Thomas Markle Junior.

Meghan’s first television appearance in the USA was in an episode of the medical drama General Hospital in 2002.

She later moved on to roles in CSI, Without a Trace and Castle along with bit parts in Hollywood films including Get Him to the Greek, Remember Me and Horrible Bosses.

Meghan was also a “briefcase girl” on Deal or No Deal – but her most famous role was as Rachel Zane in legal drama Suits, which launched in 2011.

She was written out in the finale of the seventh series when her character got married, which aired in April 2018 – just before she got married herself.

Meghan Markle’s career in television has gone hand-in-hand with her support for causes close to her heart.

She wrote about the stigma around menstrual health in an article for Time magazine and was a Global Ambassador for World Vision Canada – with whom she travelled to Rwanda for the charity’s Clean Water Campaign.

And her commitment to gender equality has seen her work with the United Nations – receiving a standing ovation in 2015 for her speech to mark International Women’s Day.

In September 2011, she wed film producer Trevor Engelson, who she began dating in 2004.

She was in a relationship with celebrity chef Cory Vitiello for almost two years, before they broke it off in 2016 but the two remain good friends.

And in June 2016, she met Prince Harry on a blind date set up by a mutual friend.

Their relationship began in October that year and just over one year later, on November 27, 2017, the pair announced their engagement.

Some have claimed Meghan Markle is the first mixed-race member of the Royal Family.

Historians are still arguing about Queen Charlotte, the wife of King George III.

But Meghan will be the first royal to openly embrace a mixed-race heritage.

She has written about the difficulties of being a biracial actress in Hollywood as she claims she is not black enough for some roles and not white enough for others.