Mark Labbett continues to wow fans by appearing on The Chase sporting his slimmer figure. He revealed he has lost a whopping 10 stone during his weight loss journey and it turns out it’s all down to several factors that “came together nicely”.

The Beast, as he’s known on the ITV quiz show, recalled tipping the scales at 29 stone back in 2003.

He told Loose Women last year: “I’ve lost 10 stone, I was 29 stone when I was a full-time teacher in 2003 and I was in danger of high blood pressure.”

Mark added: “I am gradually dropping Xs off my size.

“I’ve gone from 5XL to 4XL and it looks like the next time I go shopping I’ll be able to squeeze into XL underpants.” 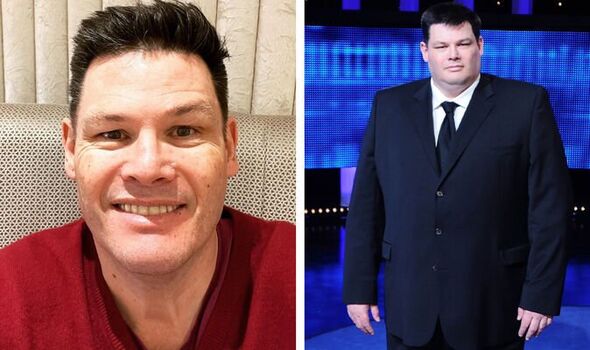 He turned his life round after he was diagnosed with Type 2 diabetes in 2016 and decided to adopt a new diet plan and follow a healthier and active lifestyle.

He continued to tell the ITV panel: “I’ve been around 26 stone up until lockdown.

“Then a few things happened quite nicely and came together and I started losing weight.”

Mark noted he began to focus more on his diet while also upping his exercise regime, which drastically helped him slim down.

He added: “The principal thing has been running after a hyperactive three year old in lockdown when the nurseries were shut.

“Instead of going to the fridge for a bit of late-night snacking, all I could do was just collapse on a heap on the bed.”

He also branded his golden retriever his “personal trainer”, as he helped him kick-start his new exercise routine.

Mark explained that his pooch Baloo, kept him motivated to keep fit during his appearance on ITV’s The Pet Show.

He told hosts Dermot O’Leary and Joanna Page: “My wife promised me that when we first got him she would take care of everything – feeding him, walking him and so on.

“That lasted about two weeks before she decided, ‘Actually Mark, look at your belly – you need the exercise!’

“I was walking him around the fields, taking me places… I think he’s helped a lot, simply because I’m doing more activity.”

In his latest Instagram post documenting his weight loss, the TV quizzer shared a photo of himself looking slim as fans gushed over all his hard work.