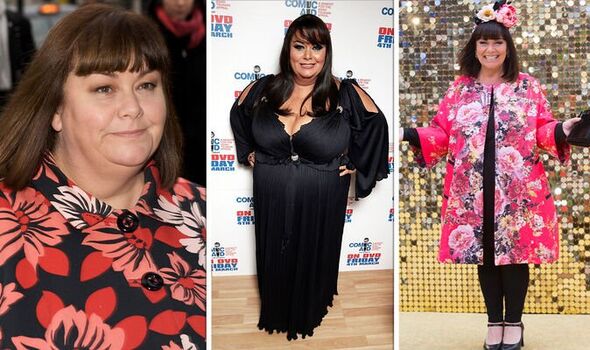 Dawn French appeared on The Graham Norton Show on Friday ahead of her performance in the upcoming Death on the Nile adaptation.

The actress dropped seven stone in a relatively short period of time. But how did she do it?

Dawn lost weight a few years ago after she split up with ex-husband Lenny Henry.

But the real reason why the star had to drop a few pounds had to do with her own health.

The comedian weighed 19 stone when the doctor told her she needed keyhole surgery after a cancer scare.

The star had to urgently lose weight in 2014 ahead of her hysterectomy.

Dawn revealed she had no choice but to slim down.

She said: “When I was due to have my hysterectomy the doctor told me that if I could lose some weight before the op, they would be able to do it via keyhole, and I would recover in three weeks or so.

“Otherwise it would be big open surgery, and three months to recover.”

Dawn explained she only had low-calorie meals and started exercising more.

“I set about dropping a few stone. No magic wand, just tiny, joyless low-cal eating and lots more walking for weeks and weeks.”

She continued: “It was grim. I lost seven-and-a-half stone. I could have the keyhole surgery.

“Great. That’s all it was, practical,” she explained.

Dawn’s secret was to follow a balanced and healthy diet and to exercise more often.

Although the excess weight wasn’t too hard to lose, the actress admitted struggling to maintain her new weight.

She said: “I shed the weight a long time ago, I go up a bit, down a bit, feel no different. I’m still Dawn, I liked the old Dawn, I may go there again, depends how many doughnuts I decide to eat.

“I’m not going to be stingy to myself anymore. I never did dislike anything about my body, even when I was very, very fat. I refuse to be forced to dislike myself.”

Dawn continued: “I used to get really angry when I did lose weight, people going, ‘You look so well,’ as if you looked awful before – rewarding you for managing it, which is not easy, I accept that.

“But I didn’t want people to give me approval. It’s so patronising.”