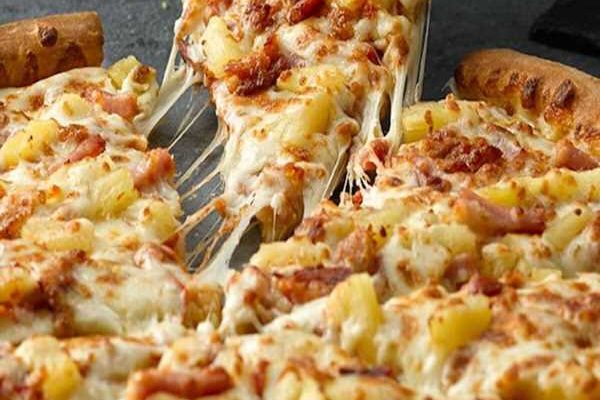 Pineapple. Pizza. For some people, just seeing those two words next to each other can be immensely triggering. Those who do like pineapple on pizza, however, can often feel like the rest of the world is insane for shunning this perfect topping. No matter which side you’re on, the pineapple on pizza debate is so contentious that even the president of Iceland has gotten caught up in its tangled web.

Well I don’t know if Papa John’s latest menu tweak will settle this longstanding debate once and for all, but it should at least give the curious and the skeptical the chance to at least try some decent pineapples on their pizza. That’s because their new, improved Super Hawaiian Pizza incorporates Dole pineapples alongside Canadian bacon, (regular) bacon, and cheese to present what could be the Platonic ideal of a mass-market Hawaiian pizza.

The decision to go with Dole finds Papa John’s both drawing a line in the sand and putting their “better ingredients, better pizza” slogan to the test.

WATCH: This Little Caesars Pizza Is Half Pizza, Half Breadsticks

“At Papa John’s we believe that pineapple belongs on pizza,” Paul Fabre, SVP of Product Innovation at Papa John’s, said of the partnership according to QSR. “Partnering with Dole makes sense because there is nothing more important or vital to our business and to earning our customers’ trust than providing high-quality food.”

This isn’t the only time in recent memory that Dole’s pineapples have inspired or been incorporated into something like this. Inspired by Disney’s World’s massively popular Dole Whip, a Florida brewery recently launched their own Dole Whip Sour, which sounds like it would be perfect to pair with Papa John’s pineapple pizza if it didn’t sell out almost instantly.

For better or worse, you should have a much easier time getting your hands on some Papa John’s Super Hawaiian pizza. Whether or not it’s any good is probably a matter of perspective, but at least crappy pineapple is no longer an excuse.