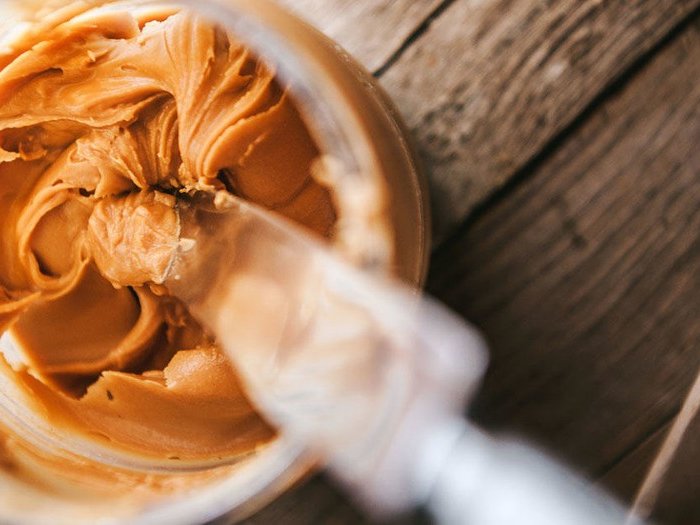 Ah, nut butter—how we love thee. The all-American peanut butter has more than 4.6 million hashtagged photos on Instagram, has probably been one of your lunch staples since you were old enough to walk, and even has had a handful of rap songs written about it. In 2017, the global peanut butter market was worth $3 billion, and on average, Americans consume more than 6 pounds of peanut products per year, with about half of that in peanut butter form, according to the American Peanut Council.

Chances are, you probably have at least a few jars of it stashed in your pantry and have dipped into them with only a spoon on occasion—okay, or all the time (no judgment here!). (You’ll also LOL over all these things only nut butter addicts will understand.)

But is nut butter actually healthy for you? And is there a queen nut butter to rule them all? Here, your all-inclusive guide to nut butter in all its forms.

The question isn’t why you should eat nut butter, but rather, why not? Just like the nuts they’re made from, “nut butters are nice sources of fiber, micronutrients, anti-inflammatory fatty acids, omega-3 fatty acids, and protein, and they’re incredibly creamy, delicious, and versatile in preparing meals and snacks,” says Monica Auslander Moreno, M.S., R.D., L.D.N., a nutrition consultant for RSP Nutrition.

A 2-tablespoon, nutrient-dense serving of nut butter usually has about 190 calories, 6 grams of protein, and 14 to 16 grams of fat, with carbohydrates ranging from 0 to 8 grams, depending on how much sugar is added, says Kerry Clifford, M.S., R.D.N., L.D.N. While the fat content may seem high, “the good news is the fats are mostly poly- and monounsaturated fats, which are helpful for absorbing nutrients, keeping you full, managing blood sugar, and boosting satiety from a meal,” says Clifford, who gives nut butters “a superstar rating” when it comes to health food marks.

The biggest trouble you can get into with nut butter is overeating them. It’s easy to consume way more than the two-tablespoon serving without even realizing it unless you’re carefully measuring each serving (and who has time for that?). Single-serve packs make it easy to stick to the recommended amount, but a good visual cue to keep in mind for one serving size is a ping-pong ball, says Kristin Gradney, R.D., spokesperson for the Academy of Nutrition and Dietetics. (Eat too much nut butter, and you’ll likely go over the recommended amount of fat per day.)

How to Eat Nut Butter

Nut butter can basically be consumed any way you want to use it. But beyond a classic PB&J, the spread makes an amazing addition to oatmeal (including overnight oats), smoothies, pancakes, French toast, snack balls, desserts…the list goes on and on. And, of course, it’s pretty much the ideal flavor pairing to foods such as bananas, apples, and chocolate. (Ever tried dipping a spoonful of PB into a bag of chocolate chips? Do it—now.)

The versatile spread can also take on savory notes: Try marinating chicken in a mix of nut butter, coconut milk, and Greek yogurt. Combine it with rice vinegar and sriracha for a quick salad dressing. Or mix it with soy and hoisin sauce and a touch of brown sugar to toss with hot pasta.

Even more creative suggestions for using nut butter? The National Peanut Board recommends putting a bit at the bottom of an ice cream cone (it’s a genius way to prevent drips!), spreading it on a burger (don’t knock it until you try it), or using it as a butter substitute in recipes. They claim you can even use it as a way to remove gum that’s stuck in your carpet, clothes, or furniture. Just spread it over the gum, let it sit for a minute, and then wipe it away. (P.S. Check out more unusual uses for peanut butter.)

Let’s start with the basics. Even something as simple as peanut butter comes in many forms.

Many people grew up eating processed commercial varieties of peanut butter, with families showing extreme loyalty to brands like Jif, Skippy, or Peter Pan. (Remember the hit commercial, “Choosy moms choose Jif”?) Legally, to be considered “peanut butter,” a product must be 90 percent peanuts, according to the FDA. Processed varieties—known for their ultra-creamy texture, superb melting qualities, and idealness for baking—usually also contain sugar (about 4 grams per serving), along with less than 2 percent molasses, fully hydrogenated soybean and rapeseed oils, mono and diglycerides, and salt. While that may sound gross to read out loud, there are worse things. “[Processed peanut butter] isn’t necessarily bad; it just depends on where you are in your food journey. They will have more sodium and sugar than a natural version, but as long as you make it fit, that’s fine,” says Gradney. “If you’re eating Jif today, then maybe you can try one of the unsalted, unsweetened versions another day.” And that tagline had a point: Varieties like Jif can be a good protein source for kids that they’ll also enjoy eating, says Gradney.

Another kind of peanut butter that’s been growing rapidly in recent years is natural or fresh-ground peanut butter. Beginning in 1919, the Adams brand was among the first to produce peanut butter made from just peanuts and salt. But many other brands have since joined the market, such as Smucker’s and Justin’s. Natural peanut butter has a tendency to separate, so you often have to stir them. While you don’t have to store them in the fridge, it can help slow the separation process—though it’s really up to your own personal preference. Many grocery stores, such as Whole Foods, offer a station where you can grind your own peanut butter fresh into a container.

Reduced-fat peanut butter was introduced by Jif in the 1990s at a time when low-fat diets were in fashion. While the fat content in these spreads is decreased from 16 grams to 12 grams per serving, it’s actually only 60 percent peanuts, rendering it a “peanut butter spread” rather than actual peanut butter, by FDA standards. To compensate taste- and texture-wise for the missing fat, brands add other ingredients, like sugar and chemicals, which actually double the carbohydrate count per serving. Most nutritionists today don’t recommend it. “Why adulterate such a beautiful thing?” asks Moreno. “We now know that reducing fat in the diet is not a smart idea for health (unless you’ve recently had gallbladder surgery or gastroenteritis)—especially healthy, nut-based fat.”

The last few years have seen the rise of another kind of peanut butter: powdered peanut butter. It’s made from roasted peanuts that are pressed to remove most of the oil, then ground into a fine powder. Brands like PB2 or PBfit contain only about 2 grams of fat, 6 to 8 grams of protein, and 2 grams of fiber per 2-tablespoon serving, making it a great addition to things like smoothies and oatmeal when you want the flavor of peanut butter without all the fat and calories. You can use it on its own, too, mixed with a little water or milk, though it won’t mirror the texture of real peanut butter—and it can quickly turn runny if you add too much liquid. (See: Why You Should Buy Powdered Peanut Butter)

The global peanut butter market is expected to grow at a compound annual growth rate of 13 percent through the year 2021, according to research firm Technavio. As such, brands continue to innovate with new products to meet demand. For example, Wild Friends launched a collection of peanut and almond butter with added collagen, and RXBAR makes single-serving nut butter with 9 grams of protein per pack, thanks to the addition of an egg white. (See: Protein Spreads Are the Latest Healthy Food Trend)

Made from ground almonds, almond butter has a slightly higher fat content than peanut butter, with up to 18 grams of fat per 2-tablespoon serving. Yet, it’s also a bit more nutritious and boasts a healthy dose of vitamin E. “Nut to nut, almonds have a higher antioxidant content [than peanuts], so they’re going to be more nutrient-dense,” says Gradney. “It’s going to boil down to flavor preference. I personally believe in functional foods, so I believe if you’re going to eat, choose the food that’s going to give you the most benefit nutritionally.” If you’re following the keto diet, almond butter’s high fat content makes it a great choice—and it’s also paleo and gluten-free.

With an ultra-smooth, creamy texture, cashew butter is high in copper, magnesium, and phosphorus, and the best nut butter to have on the keto diet, according to dietitians. Justin’s makes cashew butter, but it can be a little bit harder to find compared to peanut and almond butter. It’s easy to make your own, though—simply roast cashews for about 10 minutes in the oven, add to a food processor, and process for about 10 minutes (add a teaspoon or two of coconut oil if needed for consistency).

Sunflower seed butter is an excellent alternative to nut butter, as it’s generally safe for people with allergies to peanuts and tree nuts (two of the top eight allergens), says Clifford. It has a similar texture and nutritional value to peanut butter. SunButter is a common brand, but you can also buy sunflower seed butter at Trader Joe’s.

Made from ground-up sesame seeds, tahini is a paste that has a texture similar to peanut butter, with a delicate, roasted sesame flavor. Frequently used in savory dishes like hummus and baba ghanoush, it’s also a great substitute for peanut or almond butter in sweets like brownies. Thanks to the increasing popularity of the Mediterranean diet, it’s become more accessible in the last few years, with brands like Soom popping up on regular grocery shelves. It should be stored at room temperature and may require stirring, as the oil can separate from the rest of the paste.

Because of their high fat content, almost any nut will break down into a butter if you process it long enough. Homemade nut butter you can find popping up in cafés and restaurants across the country include macadamia nut butter (up to 20 grams of fat per serving), pecan butter (rich, grittier texture), pistachio butter (almost looks like pesto), and walnut butter (a great source of omega-3s).