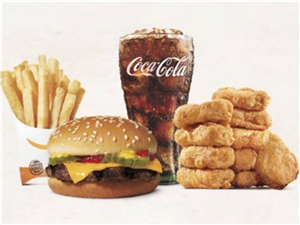 These days, you have to try and find value wherever you can. There were lots of food deals to be had in the early days of the pandemic, but it seems like prices and promotions have scaled back to “normal” levels  despite the fact that life today is anything but.

So with that in mind, hats off to Burger King for offering a whole crapton of food for the price of 200 pennies.

As mentioned in the tweet confirming that this deal is real, the $2 Snack Box gets you 10 nuggets, one cheeseburger, a medium order of fries and a small drink for, again, $2. That comes out to 50 cents per item you get, or 20 cents per nugget with a free burger, fries, and drink. No matter what sort of creative encountering you choose to employ, that’s an affordable way to fill up.

While it sounds too good to be true, it’s certainly not— as long as you have BK’s app. There, you’ll find the $2 snack box deal under the “offers” tab. Also hidden within there seems to be a $2 “Whopper Wednesdays” deal. Even if you don’t like great Snack Box deals and it isn’t Wednesday, new users to the app can also claim a free whopper when they sign up.

The major caveat with the Snack Box deal, as fast food ads so often mention, is that prices and participation may vary. Depending on where you are, you might end up paying a bit more than $2. Usually that isn’t a big deal, but jumping from $2 to $3, that’s a 50% increase!

Anyways, it’s hard to complain about getting that much food for $2 (or $3) either way, and it certainly puts that Wendy’s 4 for $4 deal to shame. Hopefully this will kick off some sort of fast food arms race, where chains compete to offer as much food as possible for as little as possible until their profit margins disappear entirely. I think that’s something we can all get behind.