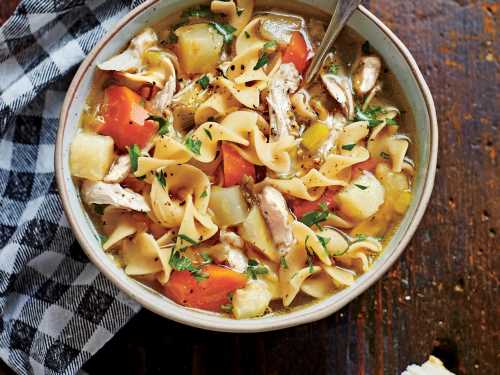 There are few more satisfying—and economical—grocery store purchases than a rotisserie chicken. Succulent and richly flavored if done well, with crisp, tasty skin, rotisserie chickens are perfect for a weeknight meal accompanied by a salad or done up with a fresh persillade, and if there is leftover meat can often be used for sandwiches the next day. What I like to do, though, after I’ve picked over the bird to my liking, is use the carcass to make chicken soup, thereby eking out as much value as possible out of what very well could have been just one meal.

I feel as if this needs to be stated as a reminder to those who simply throw away the carcass, particularly as fall weather comes into full swing and hot soup becomes a welcome meal once again. While you can certainly just use leftover shredded chicken meat and add it to a store-bought stock, you’re missing out if you’re not using the carcass to make a deeply flavorful and nutritious base.

It’s worth mentioning that the same principle applies for your Thanksgiving turkey carcass, which should not be discarded either after it’s been worked over. Michael Dukakis, the former governor of Massachusetts who collects turkey carcasses to make soup for his family after Thanksgiving, knows this well. “Throwing out a turkey carcass is sinful,” he told The Boston Globe in 2015. “It’s a terrible thing to do. There’s so much richness and goodness in a turkey carcass, God.”

I started using chicken carcasses to make soup last year and immediately felt a pang of shame after I thought about all the carcasses I had carelessly discarded in the past. The way I go about making the soup is simple. First, I chop up some garlic, onions, carrots, celery and perhaps a turnip. I add them to an already-heating pot with a bit of olive oil and let the vegetables simmer for a few minutes. Then I add a bay leaf, thyme, and some whole peppercorns, stir the ingredients once more, place the carcass on top, and cover it with water. I bring the pot to a boil and then let the mixture simmer, usually for more than an hour, adding salt and pepper and soy sauce (for a richer flavor) to taste.

After I’ve tasted the stock and it’s to my liking, I remove the carcass, shred any remaining meat off of it and add that meat—there is often more than you’d think—back to the soup. I let it simmer a little longer, just to get a slightly richer flavor, and then it’s done.

Most of the time, I’ll add egg noodles or brown rice to the bowl when I serve it along with a garnish of chopped parsley.

I’m not going to sit here and tell you that making soup with a leftover rotisserie chicken carcass is as good as making soup with raw chicken parts, which can create a more wholesome broth. But I will say that when it’s done right and with patience, you can stretch a whole new, and newly satisfying, meal—or even two or three if you’re dining alone—out of just one affordable grocery store item. Don’t forget it.