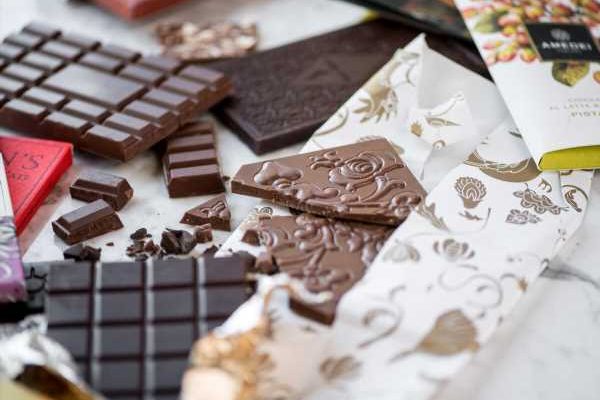 For many people, enjoying chocolate is a way of indulging their sweet tooth, a little bit at a time. For Matt Caputo of Caputo’s Market, however, it’s part of his job.

Now president of his family’s company, which is based in Salt Lake City, Caputo has expanded the original concept started by his father in 1997—a lunch deli with a small specialty market component. After Caputo graduated from college and had the chance to expand Caputo’s into the building next door, he jumped at the opportunity to get serious about the specialty food side of the business. “That’s where I kind of went crazy and became lost in food geekery ecstasy,” says Caputo.

In the last 15 years, Caputo’s has expanded to include four stores, a thriving online business, and a wholesale company that’s the nation’s largest distributor of craft chocolate. Naturally, someone had to take over the job of chocolate tasting—and Caputo was happy to do it.

On an average workday, he eats as much as a half-pound of chocolate. It’s not as simple as mindlessly snacking away behind his desk, however. Chocolate tasting is serious business that requires a keen sense of concentration.

Caputo says he practiced intermittent fasting long before this diet trend was popular. “I was always the guy who rolled out of bed at the last possible moment and thrust myself into the day, so I never really ate until dinner,” he explains. These days, he still keeps the same schedule, except now it’s on purpose.

Five days a week, he begins his mornings with CrossFit before work. “It’s basically like religion—nothing takes precedence over it,” he says (not even breakfast, which he skips). Then, he heads into the office, where he manages operations for Caputo’s, mostly sitting at his desk. Around 3:00 p.m. each afternoon, he breaks his fast with chocolate.

“[By then, I’m starving, so my taste buds are on high alert,” Caputo notes. He has to be on the top of his flavor game at all times: Last year alone, he received chocolate samples from more than 400 distinct chocolate companies trying to get their bars sold at Caputo’s. To personally vet all of these bars (each company sends between five and 10 bars), it’s quite an undertaking. He’s not just taking a nibble of each, either.

“When you’re professionally evaluating any product—wine, cheese, chocolate—unless you’re some sort of supertaster well beyond my abilities, one taste isn’t enough to evaluate,” he says. That’s why before making any decision on chocolate bars, he tastes them multiple times, and often tastes them alongside brands that are familiar to him to be able to better notice the differences.

Day to day, his preferences can change, too, so he’ll go back to bars a second time. “So many things can influence what I’m going to connect with and how delicious I think something is,” he explains—from seasonal allergies to what else he might be eating before the chocolate.

When he’s working his way through the chocolate, for about 60-90 minutes a day, he’s not multitasking by checking emails on the side. It’s important to focus on what you’re doing and be truly present when evaluating chocolate for tasting notes (i.e., burnt fudge, a floral touch, notes of caramel, a hint of anise), he says. He only drinks room temperature water when tasting, too, to prevent distracting his taste buds.

For a guy who eats that much chocolate during the week, it makes sense that on weekends, chocolate is the furthest thing from Caputo’s mind. “I literally never crave it,” he says. Caputo does take a break from intermittent fasting on the weekends, enjoying his wife’s home-cooked breakfasts. In general, he says he and his family—they have two daughters, ages 10 and 7—eat clean at home, taking into consideration how things are grown and produced.

“I don’t watch calories or fat, but I believe that old-world sustainable agriculture is a more holistic way to think about health,” he says. In addition to chocolate, Caputo consumes a lot of small-production cheeses and tinned seafood for his job. Through the market, he even offers online classes (with which you get a box ahead of time with a sampling of the goods!) on tasting both of these things, plus chocolate. He’s on a mission to help people discover that they don’t need superior taste buds to enjoy these things more—they just need to focus. “America doesn’t have an established tradition of talking about flavor nuances,” he says, “but it’s something that’s growing.”