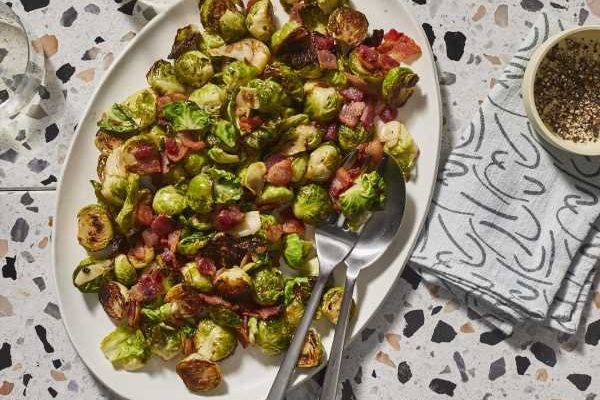 With the holiday season in full swing, many vegetable skeptics are dealing with their least favorite culinary tradition: a positive bounty of Brussels sprouts, often served alongside more palatable feast day favorites. But the notoriously divisive vegetable doesn’t have to garner derision at your yuletide celebrations this year. In fact, if your guests haven’t tried Brussels sprouts in a few years (or decades), it might be worth encouraging a taste or two. Brussels sprouts, especially for older generations, might have meant boiled, bitter tasting morsels, but today’s varieties are much milder, thanks to the dedicated efforts of Dutch food scientists.

In the past few years, you might have noticed Brussels sprouts becoming something of a year-round trend food. According to NPR, that’s thanks to the efforts of Dutch scientist Hans van Doorn, who in the 1990s figured out exactly what was lending cruciferous vegetables—like cauliflower, broccoli, and of course, Brussels sprouts—their bitter flavor. The answer was a naturally occurring chemical compound called glucosinolate, according to Better Homes & Gardens. Glucosinolates make cruciferous vegetables less appealing to animals, insects, and sometimes, humans. Not every person is born with the ability to taste the strong bitter flavor that glucosinolates cause, but the experience is common enough to lend traditional Brussels sprouts a bad flavor reputation.

After van Doorn discovered the culprit behind Brussels sprouts’ less than ideal flavor, he began working with seed company Syngenta to discover older breeds of Brussels sprouts with lower levels of glucosinolate. Once identified, those older breeds were cross pollinated with newer strains that produce higher yields or have an easier time fighting off insects and common plant diseases. While it took years of trial and error, van Doorn and Sygenta’s efforts eventually yielded the milder, delicious sprouts that diners are more familiar with today.

WATCH: How to Make the Best Roasted Veggies

Interestingly, the glucosinolate content that makes some eaters turn down sprouts is also responsible, indirectly, for the health benefits one can garner by eating the vegetable. According to Chemistry & Industry Magazine, glucosinolate breaks down into isothiocyanate, which has a number of anti-cancer properties. It can help prevent the growth of cancers, slow the progression of the disease, and make it harder for the disease to take hold in the future. With further cross breeding, food scientists might be able to provide us with sprouts that contain the best of both worlds: less bitter flavor, but with more of the health properties found in high-glucosinolate Brussels sprouts breeds. In the meantime, however, Brussels sprouts are still a healthy addition to your plate.

Brussels sprouts are a divisive vegetable, and some will never quite develop a taste for them. But if your last experience with the seasonal standby was best described as boiled, stinky, and bitter, then it’s worth loading up a few forkfuls this season, just to try the new and improved variation. If you’re uncertain how best to cook your Brussels, try roasting them with a bit of olive oil, salt and pepper, and lemon. Adding some bacon to the roasting pan can’t hurt either, and sprinkling some Parmesan over the dish once their done will only help make the veggies more delicious. Before long, you’ll discover why Brussels sprouts have suddenly become among the most popular green on everyone’s plate.