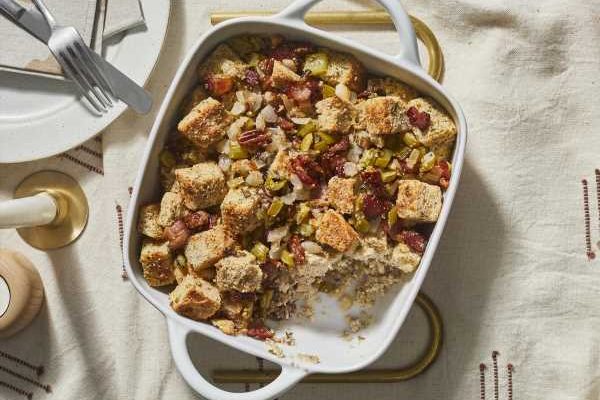 The holidays are imminent. This is my favorite time of the year, because the only thing better than holiday dinners is holiday leftovers. I have been known to make much more of something than I know I will need just to ensure that leftovers occur, and my single favorite thing to over-estimate is stuffing.

My love of stuffing borders on obsession. I did, after all, invent Stuffing Butter just so that I could make my morning toast taste like stuffing. I will eat cold chunks of stuffing standing in front of the fridge while I am waiting for stuffing to reheat in the microwave. But as much as I love stuffing on its own merit? I love the inspiration I get from leftovers.

I have made stuffing muffins, by adding a bit of beaten egg to leftover stuffing and re-baking in muffin tins and glazed them with leftover cranberry sauce mixed with lemon juice and confectioners’ sugar.

I have made a seven-layer Thanksgiving casserole by lining a baking pan with stuffing, topping this with cranberry sauce, shredded turkey mixed with leftover gravy, green beans, and sealing it all under a blanket of leftover potatoes (either mashed or sweet) and making the Platonic ideal of a Shepherd’s pie.

I have patted leftover stuffing into ramekins and baked with eggs on top for sort of a stuffing-shuka, and formed them into patties and pan-fried for the base of a benedict. I have re-stuffed leftover stuffing into other vessels, from onions to apples to tomatoes to mushrooms. I have used it to make a version of Southern Sausage Balls, and a definitively not-Italian riff on arancini.

Lucky for me, in addition to my own flights of stuffing fancy, plenty of other folks have great ideas for stuffing that go way beyond the Thanksgiving turkey. Rachael Ray made a Thanksgiving Stromboli, filling a roll of bought bread dough. Here are some great ones.

Watch: How to Make Keto Dressing

Get the recipe: After-Thanksgiving Turkey Hash

Get the recipe: Cauliflower Turkey Tetrazzini

Get the recipe: Stuffing Breakfast Strata

Get the recipe: Thanksgiving Pizza

And if you need a great large-format recipe for a classic herb and onion stuffing that is guaranteed to give you leftovers? Here is my technique. Take a large loaf of country or French bread and cube it and let it sit out till totally dry and stale, or toast in a low oven to dry it out. For some added texture, you can toss in some cornbread, or rolls, cubes of soft pretzel, or focaccia, whatever you like. Sauté onion and celery in butter till softened, then add to the bread. Throw in a glug of cream, half and half or whole milk if you have some lying about. Heat up about a quart of stock, and add half to the mixture, then add by quarter cups until you have things nice and moist but not overly soggy. Stir in some fresh herbs like parsley, sage, and thyme. Season well with salt and pepper. If you want meat like crumbled cooked sausage, or bacon or pancetta, stir it in. Ditto things like chestnuts, dried fruit or nuts. Taste and adjust seasoning and add more stock if needed. Stir in two to four beaten eggs and bake in a buttered baking dish at 400 degrees for about 25 minutes covered in foil and another 20 uncovered.

If you want extra deep moistness, melt another four to eight tablespoons butter in 1 cup chicken stock and pour over top when you uncover the stuffing, then continue cooking.