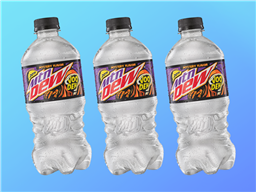 Mystery flavors are usually the most initially exciting, and subsequently disappointing, limited edition additions to grocery store junk food aisles. The white foods purportedly hold a delightful surprise, a roulette of flavor meant to keep the consumer guessing and engaged in a heated palate debate. But as fans of white Airheads, Skittles, and Dum Dums will know, mystery flavor is usually just an amalgamation of unused, mixed syrup left over from batches of more specific varieties, which means it tends to taste like cherry or some other close approximate. What if a mystery flavor was actually unidentifiable, however? So unidentifiable, in fact, that one could even say the soda is downright eerie?

Introducing Mountain Dew’s new Halloween delight, VooDEW. Like other mystery-flavored foods, VooDEW is opaquely white in color. Unlike other mystery flavors, I couldn’t begin to guess what taste Mountain Dew was going for in this variation. It truly is a surprise in every sip, a fact that makes the soda sound more promising than it actually was.

To begin with, the soda contains a whopping 73 grams of sugar, which means it’s hard to taste anything beyond spellbinding sweetness. In fairness, a high-sugar soda is somewhat of an understandable choice for Halloween, during which sugar overdosing is always en vogue. But the choice to include so much that the “mystery” flavor is indiscernible is bold. It’s possible that PepsiCo was going for candy corn, or caramel, and if so, they nailed it, in that those treats also have the potential to be grossly over-sugary.

Confusingly, however, there’s more to VooDEW than just the overbearing sweetness factor. The soda also has a strange, slightly sour taste. Is it a type of fruit? Pineapple, maybe? No idea. But it doesn’t exactly pair up well with the sugar; instead, it adds an almost bitter note to the drink, making its flavor all the more haunting.

Maybe it’s not surprising that VooDEW is a lackluster seasonal treat, given the dearth of care that was exercised in naming the special flavor. Vodou is an actual religion with tenets and rules, not a fun, creepy Halloween trope to cite for a marketing campaign. Surely there were other, better Halloween puns PepsiCo could have picked, instead of othering an Afro-Haitian spiritual practice. They could have made a “Witch’s DEW” joke, with artwork featuring a cauldron full of their soda, or they could have done something with the fact that “boo” and “Dew” rhyme. Compared with more clever and secular memes, VooDEW just feels like a product that wasn’t fully thought out.

Still, Dew fans who are looking for a sugary substitution for their afternoon energy drinks may not mind the inconsiderate name or inexplicable taste. Just don’t hand VooDEW out as a Halloween favor, lest you frighten the neighborhood with an army of hyperactive, Dew-filled kids.