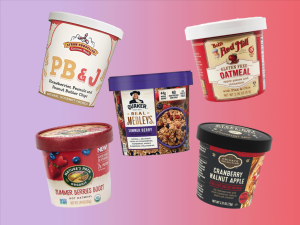 Oatmeal doesn’t exactly have a reputation for being an exciting meal. When poorly prepared, it can be bland, boring, or filled with bad textures. But on cold fall mornings, a well made cup of oatmeal can be exactly the kind of breakfast you need to get you going. And with more oatmeal companies offering convenient instant cup varieties, it’s even easier to stash a few at the office for those mornings when eating at home is not an option.

To make sure you don’t waste your time on lackluster oats, we tested out five brands of instant cup oatmeal, all of which are available online or in your local grocery stores. Here are our rankings, from best to worst.

You won’t have to hunt for the fruit in this instant cup. Kroger’s Private Selection brand packs their cups with generous chunks of dried apples and cranberries, along with a handful of walnuts, so there’s something interesting for your spoon in every bite. This oatmeal also avoided stepping into gummy territory after it cooked, making for a most pleasant breakfast experience. At less than two dollars, it’s definitely worth featuring in your breakfast routine. The sugar content is a bit high, though; a single cup contains 28 grams, 21 of which are added.

Quaker has a reputation for being the reigning oats champ, and they certainly don’t betray that title with this triple-berry inspired variety. The strawberries, blueberries and raspberries provide a nice touch of sweetness, and plump up nicely while the oatmeal is cooking. Surprisingly, this oatmeal was among the sweetest tasting, despite containing the second lowest amount of sugar: 14 grams. The oats also don’t become gummy or too thick if water is added up to the fill line, and the price is comparable to Nature’s Path and Private Selection.

Nature’s Path’s Summer Berries variety was similar in most respects to Quaker’s. The added chia seeds included in this variety also provide a welcome dose of protein and nutrients; however, it comes at the cost of detracting from the oatmeal’s texture, which was a little too gummy for some of our testers’ tastes. Still, it’s fairly comparable to our top pick; pricewise, it’s even a little cheaper. At 10 grams, it also contains the lowest sugar content of all of our oatmeals, so it might be a good choice for those looking to limit their sugar intake.

This was a controversial breakfast item for our testers. On the one hand, some of us loved the peanut butter (with whole peanuts!) twist on this berry oatmeal. But others hated the idea of adding a little crunch to their oatmeal. If you’re texture sensitive, this is definitely a variety to be wary of. Straw Propeller also ranked second highest in sugar content, at 20 grams per cup. But if you like PB&J, and you can afford the slightly ludicrous price for a single cup of oatmeal, then it’s worth sampling.

Not Our First Pick

Bob’s Red Mill is known for their quality flours and grains, so we’re a little disappointed to report that this apple and cinnamon oatmeal is sorely lacking in flavor. The cinnamon taste is definitely there, but the apple pieces are few and far between. We also found ourselves wanting a bit more sweetener, which was odd, considering there’s already 13 grams in the cup. Overall, there’s simply not enough to Bob’s Red Mill to justify it, especially when the cheaper cost of our earlier picks is considered.