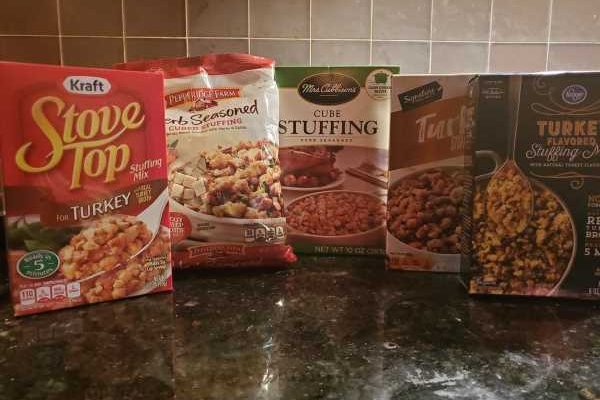 Between turkey, side dishes, desserts, breads, and drinks, Thanksgiving can keep a chef tied to the kitchen for days on end. And for ambitious chefs, the holidays can come with the pressure to make everything from scratch. However, if you already know your cooking schedule is full with items you really want to spend the time on, it’s just fine to turn towards more convenient options to make sure everything ends up on the table. Take, for instance, box stuffing. If you’re already braising a bird, then maybe let a box take care of the stuffing.

To help ease your culinary load this coming week, we tried out five different brands of box stuffing, all of which are available online or in grocery stores. On the presumption that you won’t have the extra ingredients, time, or energy to dress these dressings up, we’ve also gone with the simplest preparation of each variety. Here’s our rankings, from best to worst.

If you’re looking for a stuffing that will taste delicious without much effort, Stove Top is a great go-to. The onion and celery bits in this mix have genuine crunch, and the stuffing itself is well seasoned. If you had the time, it would be easy to add in more veggies or even some crumbled up hard boiled eggs or sausage to make this stuffing feel more homemade. But as it stands, it’s perfectly fine on its own.

If Stove Top isn’t available, or if you’re on a tight budget, we found Safeway’s generic brand to be a really solid backup. This box tastes similar to our top pick, but with slightly fewer bits of onion and celery. The stuffing bits do get a bit crispy in the pot after you stir them in, however, which adds a pleasant touch of texture on top of the dehydrated vegetables.

Kroger’s dressing becomes a bit more saturated with cooking than our other two picks, and the seasoning isn’t quite as potent. But it still has a lot of flavor and texture intrigue, especially for the low cost of a buck. It’s worth picking up a few boxes for quick, hearty weeknight sides, even if you don’t use it for your holiday dish.

Stuffing mixes shouldn’t just be the actual stuffing; there should be some amount of seasoning, at the very least. Unfortunately, both of these stuffing kits require you to add your own broth, as well as an onion and celery, which means the kits themselves are little more than bread cubes. And for the price they’re charging, you might as well pick up a loaf of bread in the bakery section of your local grocery store and cube the bread yourself. A stuffing mix that saves you little work/ingredients over a traditional recipe is hardly worth the cost; rather than spend multiple dollars for dry bread, you might as well make your stuffing from scratch.