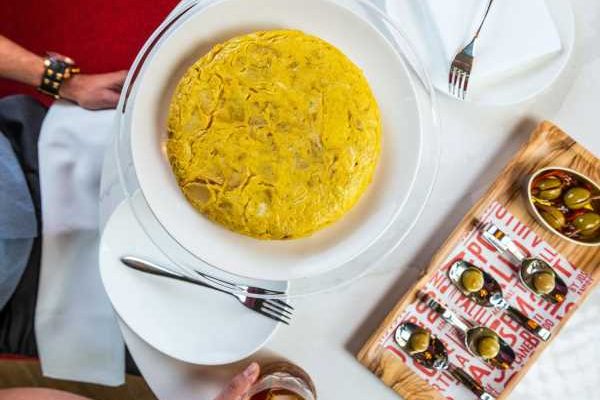 Breakfast and brunch can quickly become rote affairs. You do the thing that works for you in the morning, whether that's cereal or yogurt or cold spaghetti. There's nothing wrong with having a kind of meal uniform, but sometimes you want to do something a little bit special, but still easy enough to execute before that first cup of coffee has hit. May I suggest a Tortilla Española, the classic Spanish dish? All it requires  from you is eggs, potatoes, salt, oil, and a little bit of finesse. If you don't take my word for it, you should definitely take the word of José Andrés, the much lauded huminatiarian and Spanish-American chef.

Andrés' recipe for Tortilla Española is elegant in its simplicity. It's easy enough that you can make it at home, or in a vacation house. The trick here is to fry up the potatoes first in a generous amount of olive oil, which means that deep frying protocol applies: Be sure to watch the temperature of  the oil here, and to have a stack of paper towels standing by to drain the oil from the fried potatoes. If you already happen to have some fried potatoes on hand, so much the better. In fact, if you're hoping to whip it up in the morning, you can always fry the potatoes in advance and re-crisp them in the oven when you want to use them.

Once your potatoes are fried, beat the eggs until they're foamy and add the potatoes in there to coat about a minute. Then pour the whole mixture into a hot skillet and let it cook until it puffs up, flipping the tortilla twice to allow it to cook on both sides and making a small hole in the middle to allow the eggs to cook all the way through. When you're done, you'll have a gorgeous tortilla to slice and serve to a crowd, or to savor for quick breakfasts for several days. If it works for José Andrés, it may very well work for you, too.

Get the recipe for José Andrés' Tortilla Española.