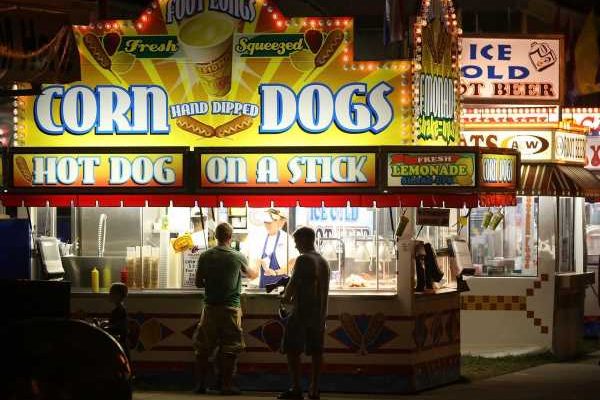 We’re in the dog days of summer, which means it’s state fair season in certain parts of the country. While these events are wide-ranging affairs full of agricultural-themed events, amusement park rides, concerts, and other exploits, the real reason anyone should go to a state fair is for the food.

And seemingly every year, Iowa’s wild, decadent, and downright weird array of eats represents some of the best state fair food you’ll find anywhere in the country. This year, Iowa’s signature summer event will feature almost 200 food stands, with 80 different foods on a stick available for consumption.

Watch: How to Make Pickle Pie

The fair itself won’t start until August 8th (ending on the 18th), but organizers have already announced finalists for food competitions and even started handing out awards. The winner of the Best New Deal contest a Cookies and Cream Wonder Bar sold by J&L Soukup’s took home top prize as the top under-$4 option. Consisting of cookies and cream ice cream that’s then dipped in chocolate and rolled in crushed Oreos, it sounds like one of the best things money can buy in the entire state of Iowa next month.

Meanwhile, a fierce battle is shaping up for Best New Food between the Georgie’s Roast with the Most Wrap and a challenger simply known as “The Chief.” The former is a beef pot roast-basd Mexican wrap that also features Chorizo sausage crumbles, roasted green chilies, and candy corn salsa(!). Meanwhile, The Chief is a play on Navajo-inspired barbecue, combining fried bread with slow-smoked brisket adorned with a cilantro lime slaw and a salsa cream drizzle.

Fans can use the Iowa State Fair App to vote for their favorite of those two foods, or nominate a third finalist of their own. And there are plenty to choose from, with a perusal of Best New Food participants suggesting strong contenders like Jalapeño Popper Pizza, The Colossus, Bacon Wrapped Pig Wings, and X-Treme Balls, among many others. If you’re not gonna serve one decadent comfort food combined with something else that will also clog your arteries, don’t even bother showing up.

So if you have a craving for “Slaughterhouse Poutine” or Dill Pickle Popcorn, there’s only one place to be in August. I already can’t wait to see the awkward photos of presidential candidates trying to ingratiate themselves with Iowans by eating this stuff.