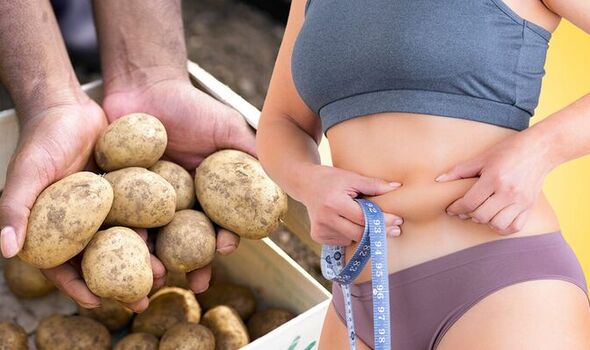 Carbohydrates like potatoes, white pasta and rice, and white bread have had a bad reputation for many years, especially with the rise in popularity in keto, paleo and the Atkins diets. But, new research has revealed eating potatoes can aid weight loss as they help you feel full faster, therefore preventing you from eating more calorific foods later on.

Potatoes are said to contain around 80 calories per 100g – this is more than twice as much as other vegetables like carrots and broccoli.

But they also contain up to half the calories of bread, pasta and rice, when eaten in the same quantities.

To reap the benefits of potatoes, how they are prepared and cooked is important; eating chips and crisps should be avoided because frying potatoes lowers their nutritional value.

Study co-author Professor Candida Rebello, a dietitian at Pennington Biomedical Research Centre in Baton Rouge, Louisiana in the US, said: “People tend to eat the same weight of food regardless of calorie content in order to feel full.

“By eating foods with a heavier weight that are low in calories, you can easily reduce the number of calories you consume.”

The expert said the “key aspect” of the study was that the portion size of meals was not reduced, but the calorific content was by including potatoes.

Each person taking part in the study consumed meals that were “tailored to their personalised calorific needs”.

Some meat was replaced with potatoes, and as a result, participants found themselves “fuller, quicker, and often did not even finish their meal”.

Professor Candida said “you can lose weight with little effort” but following this diet suggestion.

The small study saw 36 participants aged 18 to 60 who were overweight or obese eat 85g of meat or fish at lunch and dinner, with either 57g of potatoes or 57g of cooked pulses with bread, rice or pasta for eight weeks.

The diets consumed were also high in fruit and vegetables, and 40 percent of the participant’s usual meat consumption was substituted for vegetable sides.

Those eating potatoes were boiled with the skin still on, and refrigerated for 12 to 24 hours – the cooling process increases the potato’s fibre content.

Potatoes were then added to lunch and dinner, either as mash, oven-roasted wedges or potato salad.

The results, which were published in the Journal of Medicinal Food, showed both diets contributed to weight loss, but those who ate potatoes lost 12.8lbs (5.8kg) on average, compared to those eating beans who lost 8.8lb (4kg).

Professor Candida concluded: “The individuals who participated in our study lost weight,” and she said the key to success was following a varied diet.

“People typically do not stick with a diet they don’t like or isn’t varied enough,” she added. “The meal plans provided a variety of dishes, and we showed that a healthy eating plan can have varied options for individuals striving to eat healthily.”

Potatoes are an extremely cheap carbohydrate, for example, Asda sells a 2.5kg bag of white potatoes for just £1.15.

For anyone looking to reap the benefits of potatoes, bulk cook them and store them in a plastic container in the fridge to add to dishes throughout the week.

Potatoes are also rich in vitamin C which is an antioxidant. Another major nutrient in potatoes is potassium, an electrolyte which aids in the workings of our heart, muscles, and nervous system. Potato skins also contain fibre, which is important for digestive health.