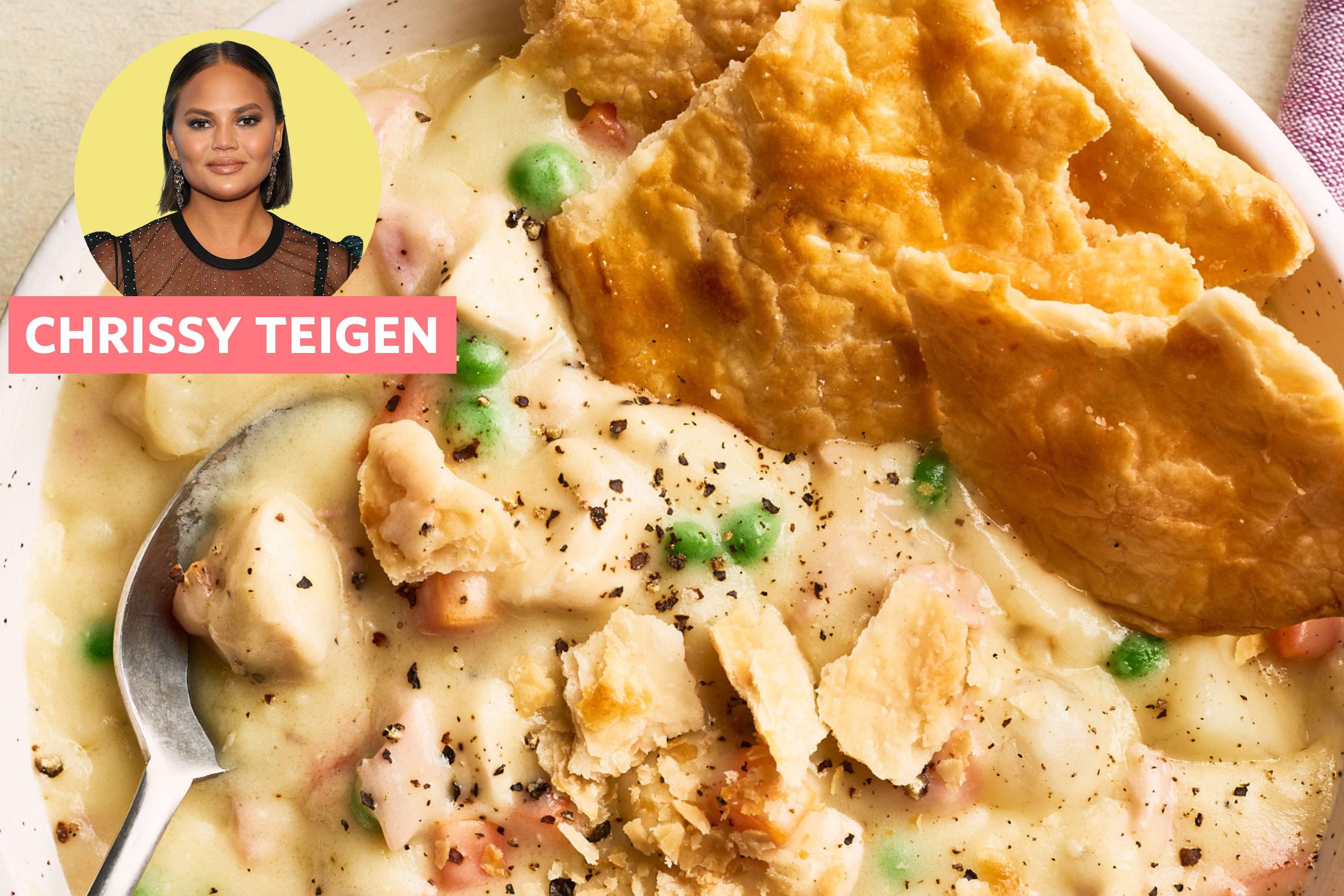 When I first saw that Chrissy Teigen’s signature chicken soup is one that’s inspired by chicken pot pie, I was intrigued. I fully enjoy a good chicken pot pie and I loved how clever the soup seemed at a glance: the broth is filled with all the good things in pot pie, and the soup is served with crunchy, buttery pie crust crackers.

Chrissy’s two cookbooks have legions of devoted fans — and PopSugar even says this specific recipe deserves a spot in the Soup Hall of Fame. That’s high praise, so I was eager to see if it deserved it. Here’s what I thought after making it myself.

You’ll start by making the pie crust crackers. To do this, you’ll pulse flour and salt together in a food processor, then add cubed butter. Then you’ll pour in ice water and pulse until the dough just comes together. You’ll cut the dough into two halves, freeze one for another use, and chill the other in the refrigerator for 30 minutes. Then you’ll roll it into a thin round, prick it all over with a fork, and bake it on a baking sheet for 30 minutes until golden-brown. One cool, you’ll break it into pieces.

Then you’ll make the soup by first bringing chicken broth and whole milk to a simmer in a small pot. In a large pot, you’ll make a roux by first melting butter. You’ll add garlic, stir in some flour, then slowly add the hot broth and milk mixture along with salt and pepper. After it thickens a bit, you’ll add diced potato, carrots, frozen peas, frozen pearl onions, and sliced deli ham, and continue to simmer until the potato is cooked through. Finally, you’ll stir in cubed rotisserie chicken meat and heavy cream. The soup is served with the pie crust crackers. 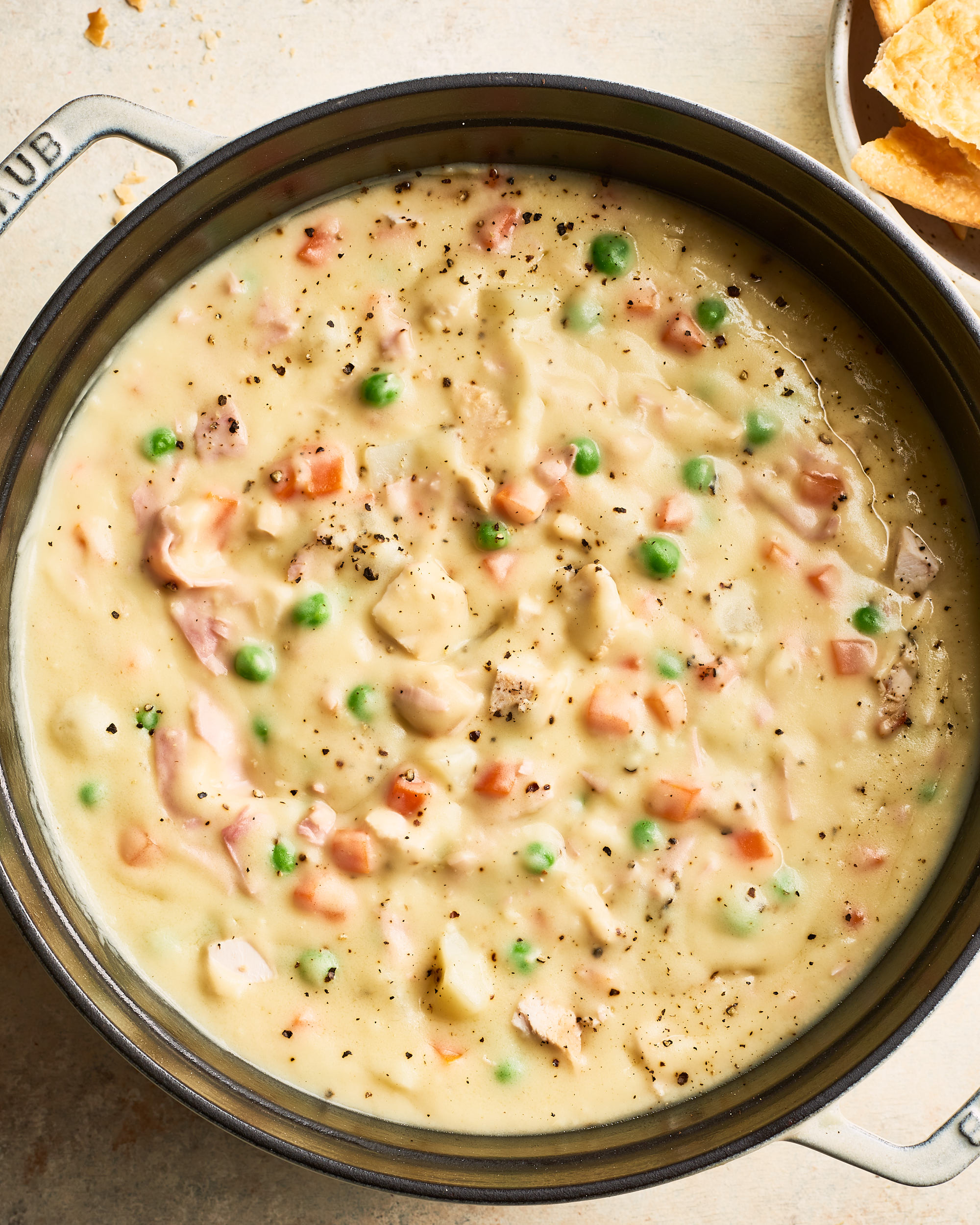 To be honest, this soup was hard to compare with the others I tested because it was the most untraditional. However, even without comparing it to other chicken soups, I wasn’t a fan. Even though I love chicken pot pie, I found this version to be too rich and heavy. The soup was already pretty thick to begin with from the roux made with butter, flour, and milk, so pouring heavy cream in at the end only made it even thicker.

Also, for some reason, my potato never softened. I diced it small but even after 30 minutes of simmering, it was barely tender. By that point, the broth had thickened even more and was becoming unappetizing.

I also found the recipe to be unnecessarily complicated. While making pie crust crackers is clever, it takes time and beside it being a playful accompaniment, it didn’t really add a whole lot to the dish. Buttery store-bought crackers or breadsticks would have worked just as well. 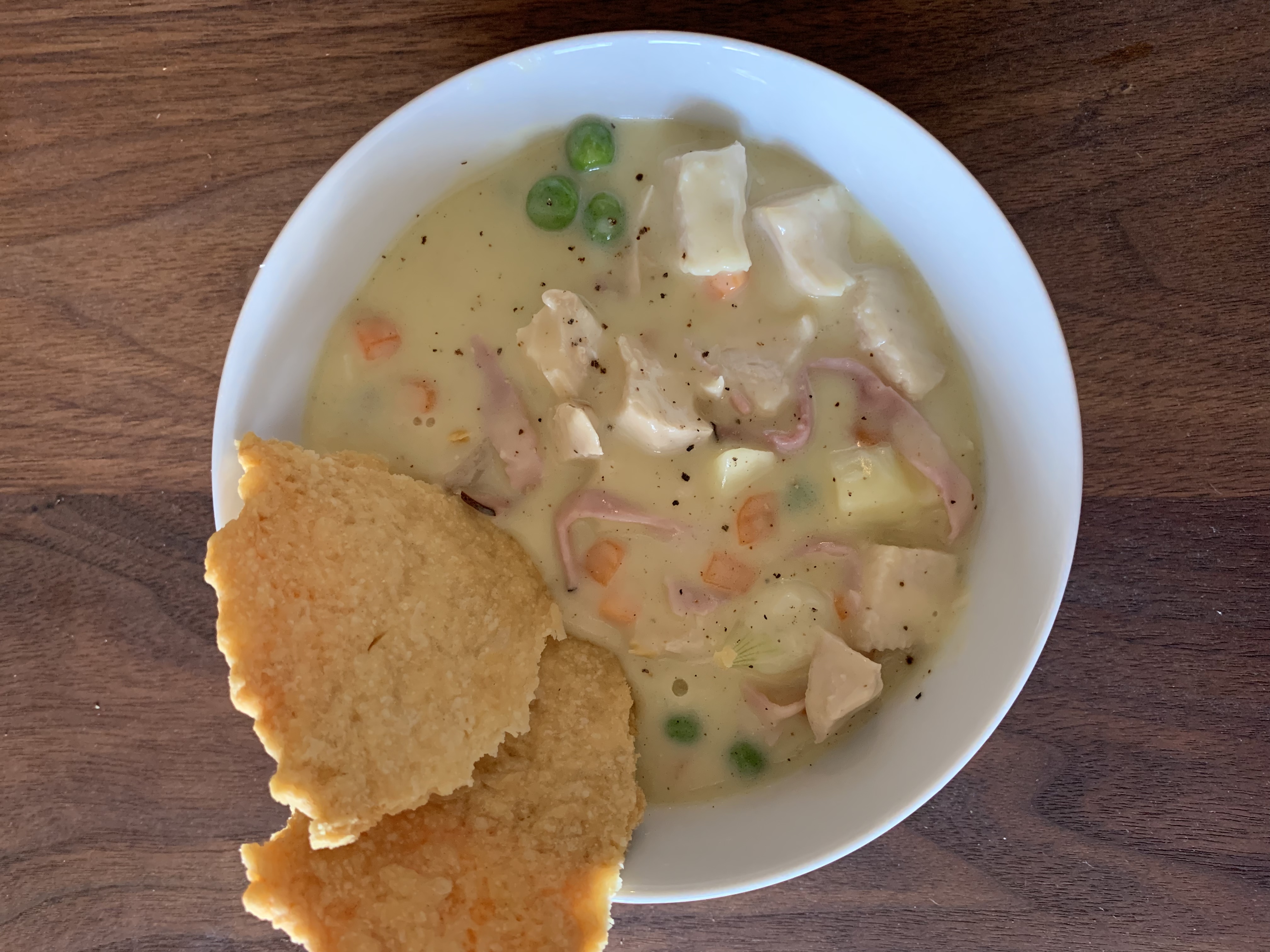 1. Skip the pie crust crackers unless you really have a lot of time to kill. I am all about going the homemade route usually, but these were pretty fussy. Any buttery cracker or breadstick from the grocery store is going to work here. If you really want to lean into the chicken pot pie angle, though, buy a store-bought pie crust, bake it, and break it into “crackers.”

2. Cover the pot when simmering to avoid thickening the soup too much. Chrissy doesn’t say to cover the pot when you simmer it, but I think you should. Not only will this help the potato cook, but it will also prevent the broth from reducing and thickening so much that it’s goopy.

3. Invite friends over. This recipe makes a whopping 10 to 12 servings. Since it’s got cream in it, it won’t freeze well — it will have a grainy texture when defrosted — so you’re going to want to invite people over to help you eat it right away.

For me, this soup was really fussy to make. I ran across issues in the cooking process and the result wasn’t my taste at all.