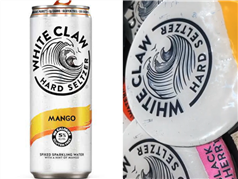 If you’re looking for proof that Zoomers and younger Millennials have had too much free time during 2020’s lockdowns, simply spend some time on TikTok. Over the past few months, it’s featured an insane amount of kitchen hacks and culinary breakthroughs. A lot of them are legitimately useful!

But now that the remote school year is over and summer jobs and internships are mostly off the table, it would seem that TikTok projects have gone in a pretty labor-intensive direction, at least if one trending post at the intersection of crafting and drinking is any indication. If you have way too much free time and an interior design aesthetic that values spiked seltzer labels as a form of home decor, it turns out you can turn your White Claw cans into coasters.

Posted by @KreativeKelly, this DIY project can transform an empty White Claw can to a coaster in one simple, seventeen step (by my count) process. Besides empty cans of white claw, you’re going to need a sink, some scissors, markers, a circular back for the coaster, some epoxy, some black paint,  a brush, and, I guess corkboard for the back. It frankly would be a little easier to follow if, like other DIY TikToks, the post featured any kind of instructive voiceover or text. Instead, we just get visuals and the kind of pop-country soundtrack you’d probably expect from someone who’s made drinking White Claw a focal point of their personality.

Snark aside, the end result of this project is pretty cool, and anyone who respects wood should have some coasters at home. Obviously, you can also follow this same process with other spiked seltzer or beer cans if you so choose. At the very least, a coaster like this will make it easier to shame your guests (in 2021 I guess?) into using one.