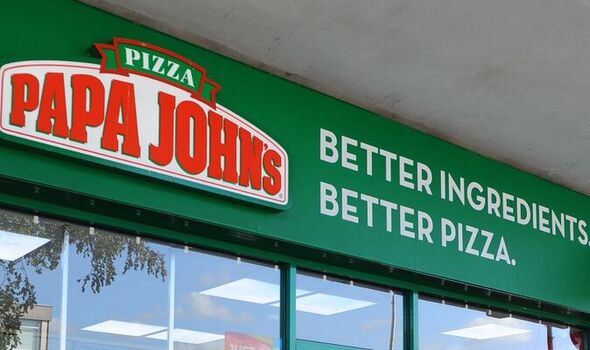 In a text conversation, the owner of a branch in Caerphilly, Wales, refused to let young employee Lawson Callaghan have free food. The boss told the 17-year-old to “stop looking for handouts” before firing him, bragging about how much he is “worth” and calling the young man a “loser”.

Papa John’s UK said they are currently investigating the incident which appears to have occurred on Friday night, September 2, and said they could not comment further until the investigation is complete, reports Wales Online.

The owner of the Papa John’s involved has also been contacted several times by Wales Online,  at the time of publication, has not provided a comment. The Express Online has also made efforts to contact him.

He texted the owner at around 10pm to ask if he could have a medium margherita for free, as he was “starving” and had expected to finish work at 9pm. 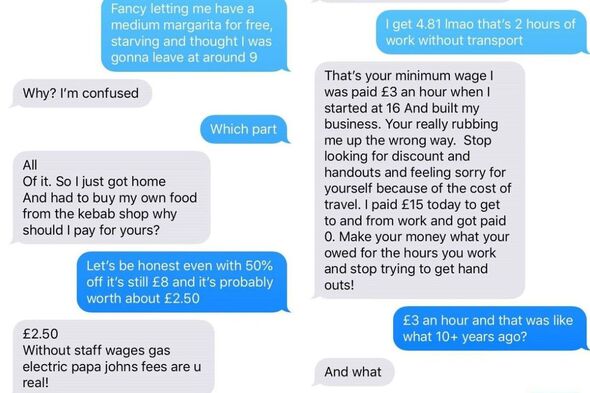 Lawson said that, while employees were not given free food on shift, they were allowed to have 50% off food.

He said he had asked for a free meal as a one-off as he had no money and had not had a payday yet.

But the owner replied that he was “confused” by the request, and asked why he should pay for the teenager’s food, which would have cost £8 with the employee discount.

After Lawson pointed out he was on a low wage and had no transport cover, the owner wrote: “I was paid £3 an hour when I started at 16 and built my business. 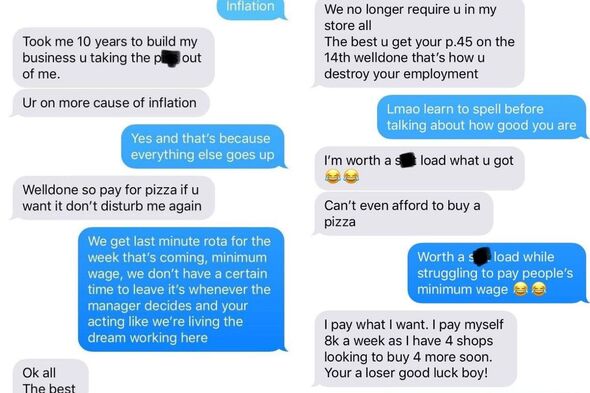 “Your really rubbing me up the wrong way. Stop looking for discount and handouts and feeling sorry for yourself because of the cost of travel. I paid £15 today to get to and from work and got paid 0. Make your money what your owed for the hours you work and stop trying to get hand outs!”

After Lawson pointed out that the owner was on a lower wage ten years ago because inflation has since risen, the owner said the teenager was “taking the p***” out of him, told him to pay for the pizza himself and said “don’t disturb me again”.

After Lawson proceeded to complain that the employees’ rotas are provided at the “last minute”, they are on minimum wage and the time they are allowed to leave work is at the manager’s discretion, he said the owner sacked him on the spot.

In the remainder of the conversation, the employer appeared to brag about his wealth, saying he is “worth a s*** load”, while also mocking Lawson for not having enough money.

“I pay what I want. I pay myself 8k a week as I have 4 shops looking to buy 4 more soon. Your (sic) a loser good luck boy!” the owner wrote.

Lawson said he was then removed from a group chat with the owner and other Papa John’s employees.

Another employee in the “Papa Johns Caerphilly” group chat shared screenshots with Lawson that revealed that the owner had appeared to share screenshots of their conversation with the rest of the group, along with the caption “I can’t believe the cheek”.

After the employee advised that the owner should keep the conversation between himself and Lawson, the owner replied: “Nah my business I do what I want”. 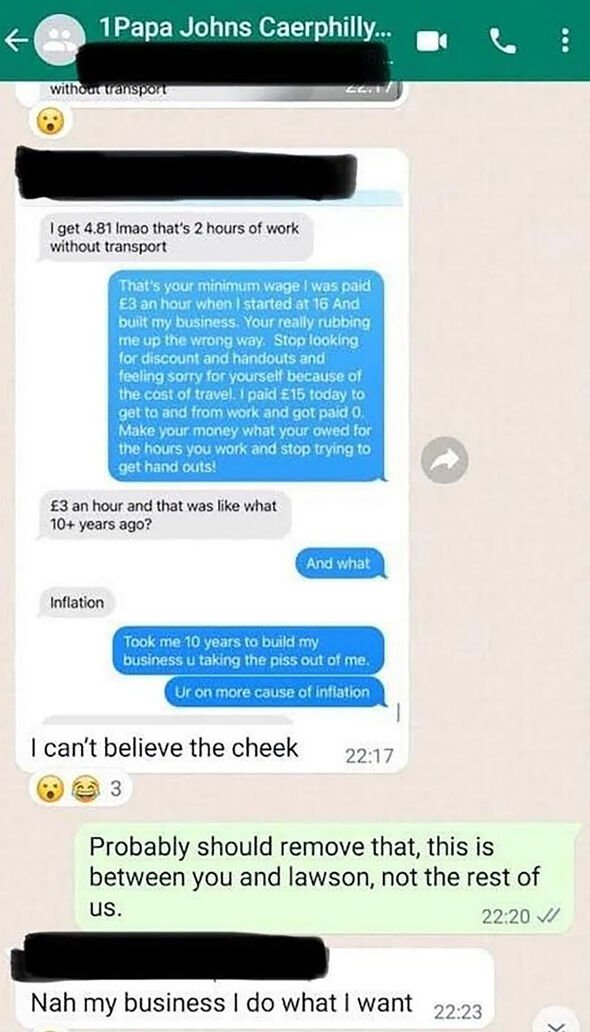 Speaking about his reaction to what happened, Lawson said: “[I thought] how can he be saying that type of thing, especially to someone who is under 18 who’s only been working there for a short amount of time – their first job as well.”

He shared the exchange online and the owner’s actions have been widely condemned.

Lawson claimed the incident had “knocked his confidence” and that he is also concerned about getting paid. “I have no money. If he pays me on [September 14] I will get money,” he said.

“We are currently investigating this matter and it would not be appropriate to comment further until that investigation is complete.”