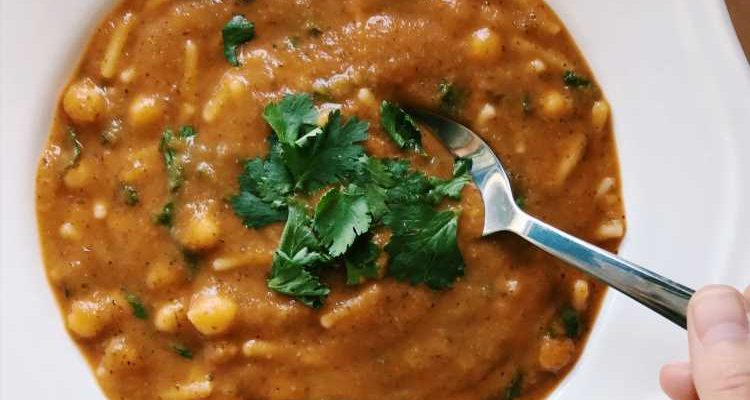 When I was growing up, my grandparents were the two best cooks in my life. My grandfather was a meat and fish wizard, able to grill, stew, braise, and roast everything to perfection. My grandmother, a Sefardic Jew from Algeria, imbued every dish with flavor and could whip up shakshukas and fruit pies with the same innate talent.

And as an only child (and only grandchild until I was 10), I got to enjoy the quasi-exclusivity of all their greatest dishes. I spent most of my vacations and many of my weekends at their place, being treated to sole meunière, lamb meatballs, soupe au pistou, gazelle ankles (a sweet almond treat from Maghreb), roasted quails, apple pies, couscous royale, artichoke barigoule, crêpes, stuffed squid. In short, I was a very spoiled, very lucky kid who got to experience the best food education she could hope for.

Even among this wealth of dishes and deliciousness, some specialties shine brighter than others in my memory. My grandma’s soup is one of them. It’s a vessel for a metric ton of cilantro, and cilantro is the taste and the smell I associate most closely with my grandmother’s cooking — one whiff of it immediately lifts my spirits and brings me back to her kitchen. And to me this soup, filled with tomatoes and zucchini, is synonymous with late summer and the last few weeks I would spend at my grandparents’ home before heading back to school. But ultimately it’s just really delicious in a very wholesome and unpretentious way, as good family recipes tend to be.

It’s been nearly a decade since I have tasted that soup the way my grandmother made it: My grandfather passed away a few years ago, then I left France for New York, and as her eyesight began to fade, my grandmother has not even been able to cook much.

Last year, I was in New York. I was homesick and already planning the move that would take me back home. I thought of this soup and decided to make it. I called my grandmother for the recipe. But she didn’t use recipes — she cooked by instinct. So all I got were some very vague directions. How many tomatoes should I use? “You know, just the right amount.” What about zucchini? “A few, but not too many. You’ll know when it’s right.”

With this very broad roadmap, I tried to recreate the dish. As I quickly found out, you can’t really mess it up. It’s almost magical that way. It doesn’t matter if you put in too many tomatoes; it still tastes pretty good. But I’ve made it a good dozen times in the past year, getting closer and closer to the taste I remember. Now I have a pretty set recipe that I can turn to whenever I crave some of my grandmother’s food.

How to Make This Soup

The process is pretty easy and straightforward. You sweat some onions, throw in some spices (I go for cumin and paprika), then add a couple of chopped potatoes (for thickness), and chopped zucchini. Now comes the main change I made to my grandma’s original process: She would use whole tomatoes, score them with a knife, boil them for a minute each, then peel and chop them, before adding them to the rest of the veggies. This was always the most annoying part of the recipe. So I just swapped in a can of peeled San Marzano tomatoes. It makes the whole process much more streamlined, dirties fewer dishes, and the flavor is the same, if not better (sorry, Grandma).

Once all the veggies are in, you cover it with water (you can use chicken broth too, but my grandmother didn’t and I’ve found that it doesn’t make a noticeable difference), add salt and pepper, and let it simmer for 40 to 45 minutes, until it’s ready to get blended.

I usually throw in a spoonful or two of harissa at this point for a bit of heat. Once it’s all blended, all there is left to do is add some small cooked pasta (make sure it’s very al dente so it doesn’t get too soft when it goes in the soup), chickpeas, and, last but not least, cilantro. A lot of cilantro. You can keep this soup several days in an airtight container in the fridge. It does thicken with time, though, so I usually add a bit of water when I heat it up.

As planned, I finally moved back to the south of France a couple of months ago. I’ve taken this chance to document all my grandparents’ recipes that made my childhood so special. I’ve interviewed my grandmother, asked my mother and uncles what they used to eat as kids, and listed all the specialties so that nothing gets lost now that my grandmother, who our family considers one of the greatest chefs, can’t cook for us anymore. And who knows? Maybe one day, I’ll make this soup for my children. Hopefully they’ll forever associate the smell of cilantro with my cooking.

Storage: Leftovers can be refrigerated in an airtight container up to 5 days.