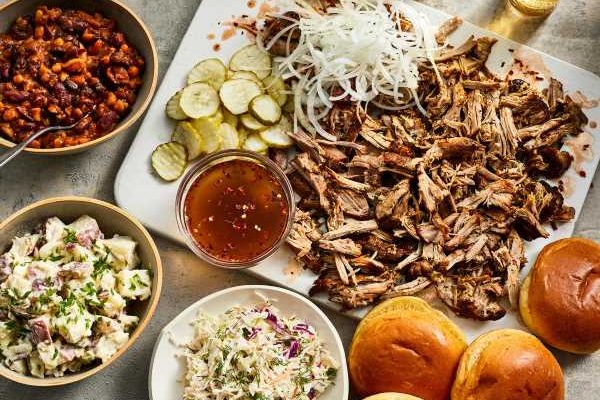 It is too hot to use my oven. It has been too hot for weeks, if I'm being truly honest, but it was during a heat wave that gripped New York City last week, driving the heat index up to 115 degrees, that I finally caved. My little un-air-conditioned Brooklyn kitchen has only an open window to serve as ventilation, and at a certain point in summer, that just won't cut it. There are, of course, many no-cook meal options when it gets to be that brutal out, but I can only eat a bean salad for so many nights in a row before I start dreaming about skillet meals again.

Luckily, there's a solution: A handy way to cook a large hunk of meat without tuning on the oven at all. If your recipe bingo card had "Instant Pot' on it then, congratulations, that's what I'm talking about. As my colleague Sarra Sedghi so wisely pointed out, using an Instant Pot to break down big chunks of relatively inexpensive meat is one of the gadget's major virtues. Not only can you cook the meat without an oven at all, you'll end up with a heckuva lot of it. And that's a great thing, because it means you can prolong turning your oven even longer.

Pork shoulder is a cut of meat that the Instant Pot does particularly well. That means that you can not just have carnitas, but also great pulled pork sandwiches. Mix up a quick sweet-and-spicy Carolina-style barbecue sauce, and you have fixings for days of Instant Pot Carolina-Style pork sandwiches for a couple people, or a really great, no-oven meal for a lot of people.

Watch: How to Make Instant Pot Red Beans and Rice

There's not much to making the pork in the Instant Pot—just seal it in there and set it to high pessure. But one important detail of this recipe is to take the time to sear the outside of the meat before it gets pressure cooked. That brings more flavor to the whole situation, and gives you some of those crispy-edge bits that are so good in pulled pork sandwiches. So go forth and enjoy not having to turn your oven on, for once.