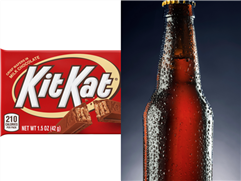 By now, it’s no secret that Japan has a pretty unique assortment of snacks and drinks that us Americans sure wish we could get our hands on. But unless you feel like going to the place where you used to buy DVDs at the mall, that’s not really an option given that Americans are currently banned from traveling to Japan.

That’s especially bad news right now, because it turns out that Japan now has its very own, very real Kit Kat beer. The product of an official partnership between Nestle Japan and Japanese craft brewer DD4D Brewing, this Chocolate Almond Milk Stout was “Inspired by Kit Kat”—and the ingredients bear that out. According to Japan Today, it’s brewed with the same cacao powder you’d find in a Kit Kat, and roasted wheat also factors in as well. The end result is a brew that exudes “the pleasant and aromatic flavors of cacao and almonds” in a mildly carbonated stout.

WATCH: Trader Joe’s Made a Cookie Butter Beer And It's Coming to Stores Soon

Right now, you might be wondering why Kit Kat decided to officially step into the world of Japanese craft beer. Well, the brew was launched as a sort of companion piece to Kit Kat SNAX, an official attempt to turn KitKat into an otsumami (which essentially translates to “appetizers” or  “bar snacks” in Japanese). Much like the beer, Kit Kat SNAX incorporates bite-sized balls of Kit Kats with roasted almonds. They also feature “roasted soybeans flavored with rich cheese,” which thankfully did not seem to make its way into the beer.

If you happen to somehow be in Japan, you can get your hands on the Kit Kat-inspired Chocolate Almond Stout, KitKat SNAX, and five assorted DD4D beers to boot by ordering online. For now, everyone else is out of luck unless you happen to know someone in Japan who can receive this order and then ship it halfway around the world. But in case you needed something else for your Japanese travel vision board in the meantime, this is for you.