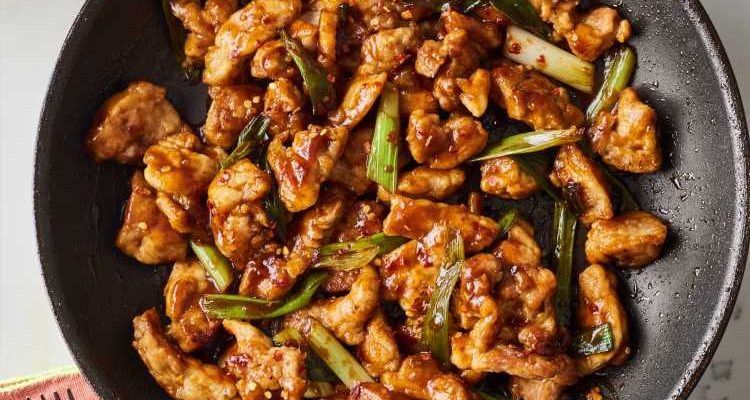 Your Chinese take-out night is incomplete without an order of crispy, bite-sized nuggets of chicken coated in a sticky, spicy-sweet sauce. Yes, I’m talking about General Tso’s chicken.

Here, we’ll walk you through the easiest way to make the cult-favorite takeout dish at home — which starts by skipping the deep-frying. Thanks to a pantry ingredient and a smart technique, we figured out how to achieve all the crispiness without the frying, which not only makes this dish easier, but a bit healthier, too!

In just 30 minutes, you’ll be piling your saucy chicken over a bowl of steamy white rice for a restaurant-worthy meal straight from your stovetop.Let’s get started.

What Is General Tso’s Chicken, and How Did It Get Its Name?

The original General Tso’s chicken recipe was invented by the late chef Peng Chang-kuei. The Hunan-style dish with its spicy-sour flavor was named after a war hero named Zuo Zongtang (or Tso Tsung-t’ang) in the mid-1950s. By the 1970s, the dish became a hit thanks two New York restauranteurs, David Keh and chef TT Wang who made chef Peng’s dish sweeter for the American palate.

When you order General Tso’s from your neighborhood Chinese restaurant, you can expect to be served batter-coated and deep-fried boneless chicken pieces tossed in a thick sweet-and-spicy sauce (broccoli and scallions are sometimes added as well). General Tso’s spicy kick is what sets it apart from sesame chicken — which has a mild, sweet sauce that’s better-suited for kids.

How to Make General Tso’s Chicken in Just 30 Minutes

To make this Chinese classic weeknight-friendly, we skipped the hot pot of oil and opted for a dusting of cornstarch instead. You’ll toss cubed chicken in cornstarch until it’s completely coated, then sear it in a hot skillet. Be patient here, and don’t flip the chicken until the crust turns golden brown, which will ensure you achieve that classic crispy texture. You can use either a nonstick or stainless skillet, but I usually reach for nonstick as extra insurance against sticking.

A note about the chicken: When you order General Tso’s from your favorite takeout joint you’re likely to be served dark meat chicken — and I’m here for that! Dark meat stays juicy and has a rich, meaty flavor (plus it’s less expensive). But the great thing about making restaurant favorites at home is that you can customize them to your tastes and your grocery list. If you’ve got a pack of boneless, skinless chicken breasts waiting in your fridge, there’s no reason not to use it.

The spicy-sweet sauce is what sets General Tso’s apart from its Chinese chicken counterparts. The best part about it is that it’s made with ingredients you probably already keep in your pantry.

You’ll start with chicken broth and soy sauce (I keep low-sodium on hand, so if you’re using regular, start with a little less and taste for saltiness as you go), then whisk in hoisin, brown sugar, rice vinegar, and nutty toasted sesame oil. Finish the sauce with earthy ground ginger, spicy red pepper flakes, and cornstarch, which thickens the sauce until it’s glossy and clings to the crispy browned chicken. Here, we finish the dish with blistered scallions and pass on the dried red chiles you usually see in your takeout box — they’re more for looks than flavor.

Gluten-free: To make this gluten-free, use tamari and a gluten-free hoisin sauce.

Storage: Refrigerate leftovers in an airtight container for up to 4 days.