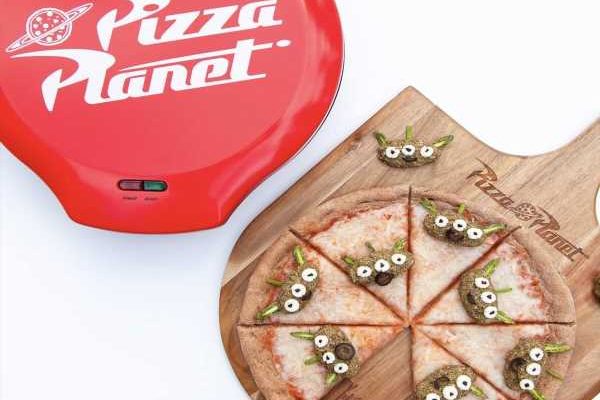 There are a lot of great moments in Toy Story, but the trip to Pizza Planet always stood out as one of my favorites. Maybe it had something to do with the vibrancy of Pixar’s now-signature animation style, but something about the movie just made me wish that sci-fi themed pizza place and arcade were real. Three more movies and 25 years of nostalgia later, and I know I can’t be the only one.

While the replica version of Pizza Planet at Disneyland is decidedly still closed, the good news is that we can at least try our hand at making some Toy Story-themed pizzas in honor of the classic kid’s movie and National Pizza Party Day on May 15.

In case you were worried that Disney would simply have you throw a topping or two on a pizza and call it a day, these pies are a bit more complex than that. Featuring cauliflower, pesto, peas, and asparagus, each slice of the Alien Veggie “Meatball” Pizza is topped with one of those little green aliens who worships “The Claw,” complete with ears, antenna, and eyeballs.

If you’re intimidated by the prospect of shaping alien faces or just generally shaping your pizza dough into a proper circle, the naan-based Rocket Ship Pizza might be more your speed. In addition to a fun shape, the recipe adds extra special details like peppers for the rocket’s afterburners.

Right now you may be thinking, “hey, those recipes sound great, but I don’t have a Disney-sanctioned way to make pizza at home.” Well, that’s where a $50 Pizza Planet-branded pizza maker comes in. It can bake up to a 12” frozen pizza (lame) or an 11” hand-tossed pizza. Obviously, though, making either of these pizzas in a conventional oven should work just fine.