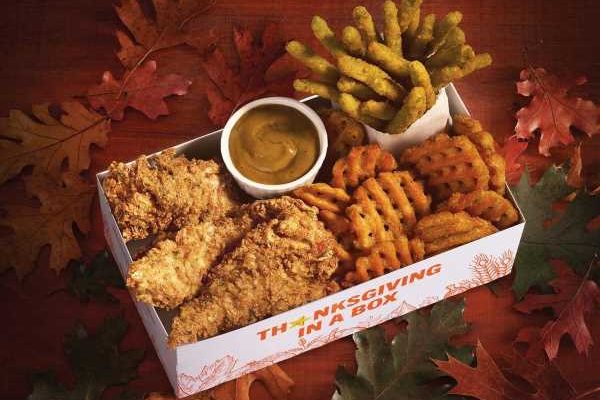 By most accounts, Thanksgiving dinner and fast food exist at opposite ends of the culinary spectrum. One meal is intensely labored over (sometimes for more than a day), and meant to be shared with family and/or friends. The other is often purchased purely on a whim, sometimes solely in order to put calories in one’s body, and is often eaten alone. So how exactly would one reconcile the significant differences between the two?

Why, why the new “Thanksgiving in a Box” from Hardee’s, of course. For the first time ever, the fast food chain is testing out some seasonal menu items, in this case themed around the most food-driven of all holidays.

For $6.99, fans of fast food fall feasts can get a full suite of menu items that collectively represent the closest thing to a Thanksgiving dinner available via drive-thru window. Among them are Stuffing Breaded Tenders, which take all-white meat chicken tenders and coat them with sage and herb stuffing breading, served alongside a savory chicken gravy for dipping. On the side, you’ll find sweet potato waffle fries, which are pretty much exactly what they sound like. To round things out, there’s also the Toasted Onion Coated Green Beans, a sort of quick service play on the green bean casserole, where crispy green beans are given a toasted onion breading and fried up until they’re a beautiful shade of golden brown. Thankfully, there’s no cranberry sauce-themed soda on offer.

Weirdly enough, the existence of Thanksgiving in a Box is the product of survey data which suggests that some Americans might want to mix it up when it comes to Thanksgiving this year. A OnePoll study commissioned by Hardee’s showed 45% of respondents are “exploring alternatives to the traditional Thanksgiving,” while 64% admitted they’d switch out turkey for something else if they could.

So by that measure, Hardee’s believes what it’s doing offers customers a low-stakes way to experiment with new approaches to Thanksgiving.

“The people have spoken, and it’s time to put a fresh spin on the holiday classics,” Owen Klein, the VP of Global Culinary Innovation for Hardee’s parent company CKE Restaurants, said in a press release. “Consumers are craving new ways to enjoy the flavors of the season, and Hardee’s Thanksgiving in a Box is the perfect way to break from the same tired take on sweet potatoes and green beans, and enjoy Thanksgiving throughout the holiday season.”

As always, there’s a catch: you pretty much have to live in or around Jacksonville, Florida to get your hands on the Thanksgiving in a Box meal between November 13th and December 3rd of 2019, while supplies last. Think of it as appropriate compensation for growing up a Jaguars fan, I guess. Hopefully the rest of us can experience this proper Thanksgiving miracle in 2020. Until then, be careful deep-frying your turkey.