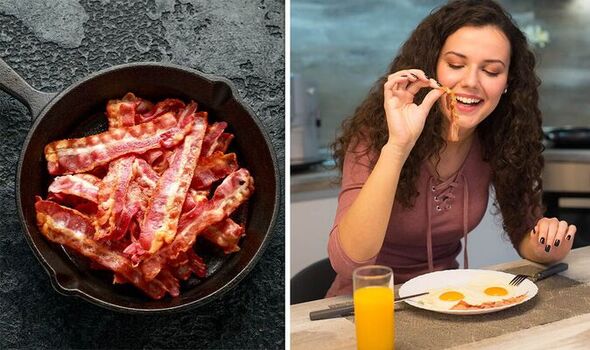 Bacon is easy to cook with and work into a range of tasty meals, but the texture isn’t always as simple to get right. Striking a balance between making it crispy without overcooking it can be difficult when frying or grilling – particularly when it comes to the fat. While it’s not the most orthodox way to cook raw rashers, a TikTok chef has shared why boiling bacon is the secret to avoiding “chewy fat” – and you don’t even need to add oil.

A hot pan and drop of oil is often the go-to method for cooking bacon, though according to TikTok chef, Roice Bethel, all you need is some water and a hot stove.

In a recent video on his profile (@noflakeysalt), the chef revealed the foolproof hack for cooking streaky pork rashers.

He said: “If you want perfectly crispy bacon you have to boil it. I know that sounds like it wouldn’t work, but it does.”

The cooking expert explained that the clever hack works by controlling the temperature at which each part of the rasher cooks at. Roice noted that the muscle – which is the darker-looking part, and the white fat cook at different rates.

He said: “The muscle cooks extremely quickly, but the fat takes a longer time to render out.” By adding water to the pan, it means the temperature doesn’t rise too quickly and balances out the cooking time.

In the video, which received 170.1K likes, the chef demonstrated exactly how to boil the rashers. He started by placing the rashers into a cold pan and adding “just enough water to cover the bacon”.

Roice said: “The water prevents the temperature from getting too high, which gives the fat time to render out. So the meat and the fat end up cooking at the same time.”

He continued to flip the rashers in the water over medium heat until they turned deep pink and golden, without having to add any oil to crisp up the texture at all.

The TikTok chef noted: “Once the water completely evaporates then the bacon gets nice and crispy, the meat’s not overcooked or burnt and the fat has perfectly rendered so it’s nice and crispy”.

Viewers were impressed by the idea, with hundreds of them commenting on the video.

One user wrote: “I’ll try this method I normally line a pan with foil, lay the bacon out and put in a cold oven, cook at 400 until your likeness.”

Roice replied to the comment stating that he does actually bake rashers “most of the time”, adding that that boiling hack works best for small batches as he “hates chewy bacon”.

Another user revealed that they use their microwave to cook crispy bacon rashers quickly.

The TikTok user who goes by the name Cody Ferell explained that just three minutes in the microwave is all it takes to “do the same thing”. Just place the rashers between two sheets of paper towels.

Others share how the boiling water hack had improved the flavour of the bacon as well as the texture.

One TikTok account @Mab3r wrote: “Can’t hurt to try it. I’ve noticed a quality issue with bacon lately and this might help.”

According to several social media users, the boiling method provides very similar results to air-fryer bacon. One of the main benefits of cooking the rashers using these methods is that they use less fat.

To air-fry raw bacon rashers, create a single layer in the base of the appliance, ensuring they don’t overlap. Set the air fryer to 200C and cook streaky rashers for 6-10 minutes.

Back-bacon rashers will take longer as they are thicker and larger. According to BBC Good Food, any batches cooked after the first load will take less time to cook as the fryer is already hot.

Remove the rashers and place them on kitchen paper to drain before serving.