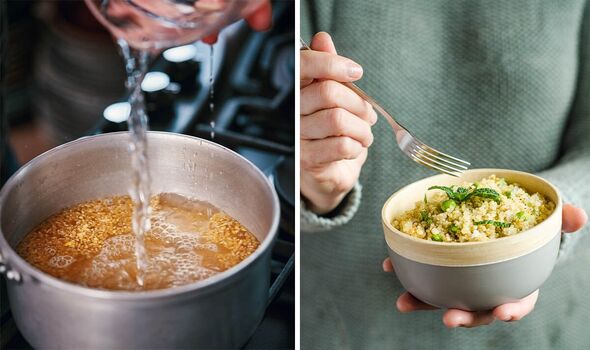 Quinoa is a great alternative to pasta and rice if you’re looking for something a bit different to add to your meals, particularly if you’re trying to be healthier. While the plain taste of this nutrient-rich seed is easy to combine with almost any flavour, the texture can be a little more difficult to master. A plant-based nutrition coach has shared her quick hack for “perfectly fluffy” results every time using one simple cooking rule.

In a recent video on her TikTok profile, the chef and nutrition expert @theelectriceats shared her foolproof technique to prevent quinoa from going “mushy” when cooking it in water.

She explained that heating the grains before boiling them in water is the secret to making quinoa “perfect every time”, adding that the water-to-seed ratio is also key to avoiding an unpleasant texture.

Using naturally gluten-free, organic white quinoa, the social media chef started by pouring out one cup of the grain into a hot pan on the hob, where she toasted the seeds for three minutes.

Though it may seem too much for raw grains, @electriceats suggested using medium to high heat for this part of the process to help with the fluffiness at the very end.

She explained that doing this “brings out the oils and rich nuttiness of the grain”, which is crucial before diluting it in water to finish cooking.

The TikTok nutritionist said: “Now take notes because the perfect ratio of the grain to liquid is one cup of quinoa to one and a half cups of water. So after adding the water, bring it to a boil and reduce the heat to low.”

At this point, you can add a little sea salt or other seasonings to the pan to infuse the seeds with flavour, though you can also enjoy the grains plain if you prefer.

While it is tempting to stir the quinoa until cooked through, the key to achieving the desired fluffiness lies in steaming the seeds with a lid on the pan for around 15 minutes.

This allows the grains time to absorb the liquid rather than becoming overcooked, which can leave the quinoa mushy and tasteless.

The TikTok chef said: “Once the liquid has evaporated, use a fork to fluff it out. And that’s it! Immaculate quinoa every time.”

While the recipe called for one cup of quinoa for every one and a half cups of water, @electriceats explained that you can reduce, or increase the quantities where necessary.

For one serving (half a cup of quinoa), you should use three-quarters of a cup of water in order to achieve fluffy, flavoursome results.

If you’ve cooked too much soft quinoa, there are ways to make it into a crispy topping ingredient instead.

TikTok recipe developer, Justine Doiron (@justine_snacks) explained that she “puts it on everything”, from soups to salads.

After cooking your quinoa using the toast and boil method, you can make this “surprisingly easy” rice alternative by simply baking it in the oven.

Line a baking tray with parchment paper and spread the cooked grains over the top in a thin layer. The TikTok recipe developer noted that you will need some kind of oil for the fat transfer to “make it crispy”.

She recommended using olive oil, infused oil, chilli oil or anything similar depending on your flavour preference. In terms of quantities, Justine noted that you will need around two tablespoons of oil per cup of cooked quinoa.

She said: “Season as you prefer and bake at 190C for 30 minutes, stirring every 10 minutes. In the last 10 minutes, you can add a balsamic glaze, vinegar, honey, lemon, you get it. It’s so versatile, so good!”

If you have an air fryer, it is possible to cook the quinoa this way. Just lower the temperature by 25C to crisp-up the grains at 175C instead.

You don’t have to consume the crispy grains right away, in fact, they should stay fresh for up to five days in the fridge, according to the TikTok cooking expert.