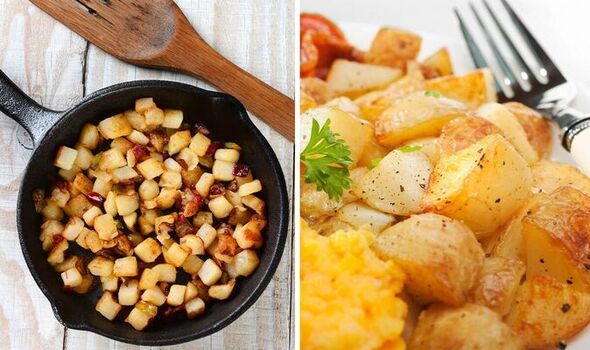 Potatoes aren’t always included in the classic fry-up, but they are a staple ingredient in breakfast hash recipes and make the perfect side dish for scrambled eggs. Known for their small cube-like shape and smokey flavours, breakfast spuds should be creamy in the middle, and seasoned to perfection on the skins. A TikTok chef has shared the “fundamentals” of cooking this simple dish – using just three key items.

In a recent video on his profile, @mattia stable explained that while there are multiple ways of cooking potatoes, for this one, all you need is a nonstick pan, oil and potatoes.

Using medium-sized white baking potatoes, he explained: “Peeling is optional but if you don’t make sure you wash them well.”

When it comes to cutting the large spuds, Mattia revealed that the best way to slice them is “on the thin side”. The TikTok chef demonstrated this by making four lengthwise slits on each potato to form slices.

He then cubed them to give the spuds their “typical shape”. Before cooking the potatoes, Mattia poured a generous helping of olive oil into a pan. Over medium heat, the chef poured the small cubes into the pan ready to be seasoned.

The TikTok user said: “All you need really is salt and pepper, but I’m adding paprika and garlic powder for some extra flavour.”

He explained that the rest is as simple as tossing the spuds in the pan to coat them in the seasoning and cook them through.

According to Mattia. moving the pan is crucial to avoid burning the skins and missing out on the perfectly golden, crunchy skins as it helps to regulate the heat.

He said: “Keep going until they’re crispy and soft inside – around 15 to 20 minutes.”

Mattia described them as: “The easiest and tastiest, zero-effort breakfast potatoes – that definitely rival oven-baked ones.”

The easy recipe was a hit with the TikTok chef’s 823.9K followers, many of which commented on the video with their own seasoning suggestions.

While most savoury herbs and spices would work with plain potatoes, one user recommended using sage to flavour the breakfast dish.

Another, who goes by the name @QamarInBER wrote: “Add cumin seeds in oil before adding anything else. It will just elevate the flavour.”

When it comes to toppings, one of Mattia’s followers suggested fried tomatoes, a little chilli and a fried egg complete the meal.