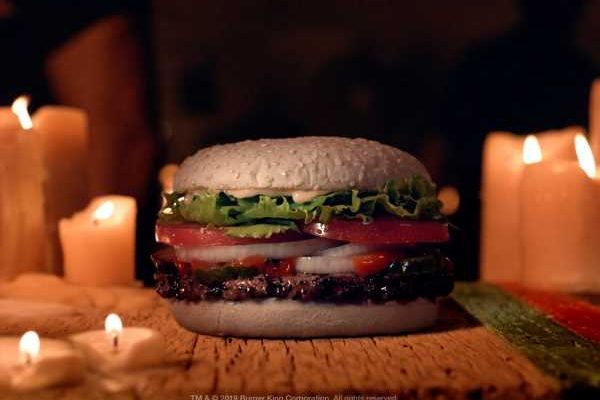 It’s almost Halloween, which means we’ve reached the height of scary food season. And when it comes to that sort of thing, you can count on Burger King to scheme up something creepy for you to feast on. This time around, though, this burger doesn’t just look haunted. It might actually be haunted.

That’s the premise behind the new, limited-edition Ghost Whopper. Inside you’ll find the usual Whopper ingredients, but the main attraction is a freakishly pale bun that supposedly tastes like cheddar cheese.

But if a video put out by Burger King is to be believed, the Ghost Whopper may go down as the first fast food item to be focused on a group of spirits from another realm.

In a video that toes the line between appearing authentic and stage, “channeler” Riz Mirza and a band of focus group participants visit The Alexandria Hotel, a space alleged to be the sight of a high concentration of paranormal activity. Mirza appears to channel spirits of the deceased, who then taste test the Ghost Whopper. While at least one spirit who possesses him describes the burger as “filth” before throwing it across the room, other beings from the spirit world seemed to be into it, for what it’s worth.

Fittingly enough, you might have better luck seeing an actual ghost than getting your hands on this burger. That’s because it’s only available in ten locations: Detroit, Memphis, Philadelphia, Phoenix, San Antonio, San Diego, San Francisco, Summerville, South Carolina, and the sufficiently haunted cities of New Orleans and Savannah, Georgia. As with all haunted burgers, expect it to be only available for a short while after it appears on October 24th.