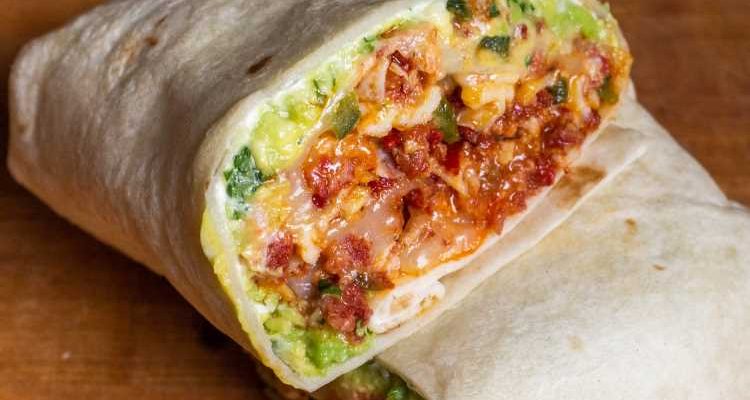 Take a basic bean-and-cheese burrito, then turn it into breakfast. That’s the basic thinking behind this flour-tortilla torpedo stuffed with scrambled eggs, melted Pepper Jack cheese, creamy refried beans, guacamole, crema (or sour cream), chorizo, and more. But of course we put a little more thought into it than just that.

Let’s start with the eggs, because that’s how the recipe starts. They’re beaten in advance with the salt and then allowed to sit for 15 minutes, since that yields more tender results. (Don’t believe anyone who tells you not to pre-salt your eggs; they’ve got it all wrong.)

While the eggs do their thing, we roast a Poblano pepper and cook some fresh Mexican chorizo, removed from its casing and broken into small pieces as it renders and browns. Then it all goes into a pan together to scramble, with Pepper Jack cheese added just at the end until melted.

The rest of the burrito comes down to additional components, but to make the best version of this burrito, you should pay attention to those as well. Read up on our techniques for top-notch guac and refried beans with soul (some people call it lard, but, you know, that’s up to you).

Proper assembly is key. To ensure every component is in nearly every bite, we layer them one atop another, like placing sheets and blankets on a mattress. This way, once rolled up, there are no sections of just eggs or just beans.

These are our recommended Medium cast iron and medium nonstick skillets.