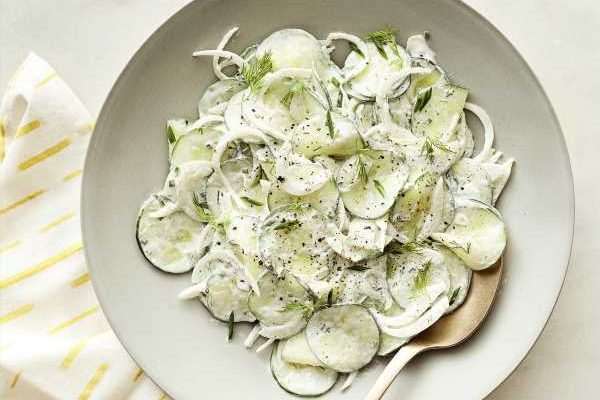 Tomorrow is the big day; the Olympics of cookouts, the all-day burger festival, the national holiday of hanging out that is Independence Day. Maybe you have a whole spread planned, full of grilled meats and cool beverages. Maybe you're tagging along to a potluck, or picnic, or some other grand event where you should bring something but it's not yet clear what. A cold six-pack or some homemade cupcakes never go awry, but if you're still contemplating what your contribution should be, and you have a little time to plan something, why not go a different route with this Creamy Cucumber Salad, the lighter, crisper answer to the traditional potato salad side.

This salad doesn't require much in terms of equipment or time, and no mayonnaise is involved. The crucial part is allowing yourself time to slice the cucumber, toss with salt, and let the excess liquid drain off. This takes about an hour, and you might be tempted to skip it, but don't. Giving the cucumbers time to chill out under a shower of salt helps draw out the moisture from the cucumber that so often makes cucumber salads into a watery mess. They'll still be crisp and refreshing, they just won't leach extra moisture into the sour cream and vinegar dressing.

Once the cucumbers have drained, there's not much else to it. Mix them with sliced sweet onion and toss them with the dressing made from sour dream, rice wine vinegar, and dill. Sprinkle it with chives. Season with more salt to your liking and if you like things on the spicier side, feel free to add a generous pinch of red pepper flakes. Serve alongside grilled meats for a refreshing side, or keep it in your back pocket for the next time you need a quick, easy vegetable during a weeknight dinner. It would be particularly nice with smoked salmon for brunch, or as a side for roast or rotisserie chicken. Your cucumbers, your rules.

Get the recipe for Creamy Cucumber Salad.