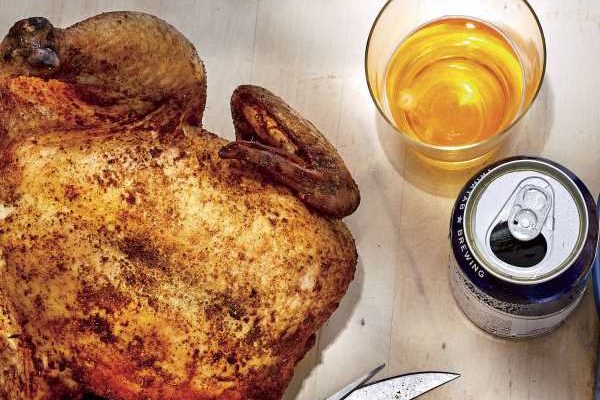 Summer is the peak season for cracking open a cold one. But enjoying beer in the summertime doesn’t have to stop with drinking it. Beer can be a game changer in your summer cooking routine too. Spice things up and try using beer to cook things like mussels, ribs, soups, sausages, and more. We asked chefs to break down exactly how they’ll be cooking with beer this summer. Here are their thoughts, and remember, pairing your beer-infused food with beer is only optional.

At the one Michelin-starred Bresca in Washington DC, chef and owner Ryan Ratino looks at beer the way he would look at wine. “You are looking for characteristics that go well with the food you are preparing,” he says. “High acid, sweet, hoppy bitterness, etc.” His go-to beer dish is chicken livers cooked with IPA. “You can also work up a sauce (using a dark beer like stout); you can steam mussels (using an ale); and you can grill with your favorite beer to keep your meats moist.” Ratino warns that cooking beer at an extremely high heat can make beer come off as bitter on the palate. “To avoid this, a touch of sugar, honey, molasses in the cooking process will help a great deal,” he says.

Get the recipes: Mouth-Watering Recipes to Make With Beer

Jason Neroni of The Rose Venice tends to pick lighter beers for cooking because they make it easier to balance things. “Heavier beer will weigh down a dish,” he says. One of his favorite uses of beer in food is a mussel dish cooked with white ale, garlic, n’duja, butter, and a beer vinegar from Minus 8. “Don’t forget to pair with a garlic rubbed chargrilled bread,” Neroni says. Another top pick is sausages first cooked in beer with Spanish onions, bay leaf, garlic, thyme, and lemon, then finished on a grill. When you start cooking with beer, don’t go overboard. “You should go easy when beginning to cook with beer. Start and add slowly,” Neroni says. “Beer is a great additive when used correctly but can overpower a dish very quickly.”

If you’re cooking fish, look for a beer with lemon or citrus notes that’ll provide acidity to the dish, recommends The Signature Room chef Cardel Reid. Other flavor notes matter, too. “There are different factors that come into play—such as the hoppiness of the beer,” he says. “I usually try to pick a lighter beer because it’s easier to balance out and compliment the other items in the dish.” When using a beer to cook a lemon butter sauce, Reid picks a beer light enough to cut through the heaviness of the butter.

Get the recipe: Beer Can Chicken

Chef Paul Canalas of Duende in Oakland finds beer to be such a versatile cooking component that he uses it not only in main dishes, but sides like aioli and salsa as well. “It really depends on your imagination and cooking skill,” he says. “I take into account the properties of the beer; it's acidity, sweetness, weight and any flavor notes.” One of his favorite uses of beer in cooking is making a Carbonnade a la Flamande, a Belgian dish of beef braised in dark beer. For this dish, he makes beer the main braising liquid, then splashes fresh beer into the dish at the end to finish.

In the cooler months, The Bazaar by José Andrés chef de cuisine Holly Jivin loves beer and cheddar soup. In the summer, she cooks seafood with pilsner. If you’re rocking a braised meat dish, try a brown ale or darker beer. More importantly, have a good time experimenting with the cooking process. “Don’t be shy,” Jivin says. “[Beer] can be used in many of the same applications as wine. Have fun with it!”

Get the recipe: Beer-Battered Cod and Onion Rings

At Redbird in Los Angeles, chef and owner Neal Fraser makes a beer vinegar in house to keep on hand. “It offers flavor and an acidic taste that pairs well with fatty meats ideal for grilling,” he says of the condiment. But his preferred use of beer is in meatier dishes. “My favorite dishes to incorporate beer into are Calabrian chili-glazed pork spare ribs and elk chops with a huckleberry demiglace, both prepared on the grill,” Fraser says. His favorite beer pairing for these dishes is Orion, a rice lager brewed in Japan.

The list of dishes you can cook with beer is endless, according to WP24 by Wolfgang Puck chef de cuisine John Lechleidner. “You can make braised short ribs with a nice stout, marinades, ‘beer floats,’ pan sauces, caramels,” he says. But his favorite is sausages, beer, and sauerkraut all thrown into a pot and left to simmer together. Lechleidner recommends using beer in your cooking as something to help build flavor. “Hops are bitter so you will need to balance it out with either sugar or caramelization of vegetables,” he says. “If you are searing a steak or roasting a chicken, deglaze the pan with beer and make a beer pan sauce.”