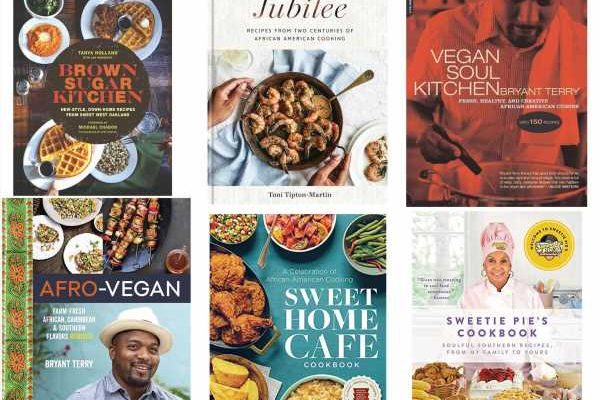 During the ongoing struggle against police brutality in America, there are several ways to show support for the Black community—protesting, self-educating, listening, and, of course, donating, to name a few. Another vital way is to shop at Black-owned businesses, which have been disproportionately affected by the coronavirus pandemic—including Black-owned independent bookstores, many of which have faced the threat of closing. Since cookbooks are our bread and butter, we asked owners and staffers at Black-owned bookstores around the country to recommend their favorite volumes written by Black authors; their picks are all shoppable online at their respective stores. Read on to learn more—and find your new favorite cookbook, too.

“This cookbook—named after the eatery that has become as much a destination as the museum that houses it—is an homage to African diasporic people's contributions to American foodways. Recipes celebrate the cunning of Black American cooks who, despite limited resources, created some of the nation’s most masterful culinary classics. The Sweet Home Café Cookbook situates ingredients, flavors, and techniques within vibrant Black traditions expertly. As much a history book as it is a recipe resource, this invaluable text recommends serving meals communal-style, highlighting the importance of food, family, and fellowship.” —Hank Oliver, team member at Marcus Books (Oakland, CA)

“If you want to know what Oakland tastes like, this cookbook—named after one of the Bay Area’s most famous and beloved restaurants—should be at the top of your list. Tanya Holland has crafted a colorful collage of recipes that include the restaurant's signature dishes (like cornmeal waffles and fried chicken) alongside traditional and not-so-traditional sides. Holland’s work evokes the rich legacy of southern Black cooking delivered with a playful nuance that is undeniably ‘Oakland.’” —Hank Oliver, team member at Marcus Books (Oakland, CA)

“The recipes in Tanya Holland’s Brown Sugar Kitchen give the home cook the opportunity to experience the treats of her lauded Oakland and San Francisco restaurants. Her pork hash is to die for (I sometimes substitute smoked turkey), and her smoked mashed sweet potatoes, partially smoked over wood chips in a grill or smoker, should be a staple at your Thanksgiving table.” —Georgia “Mother Rose” West, owner and manager of Underground Books (Sacramento, CA)

Buy It: Jubilee: Recipes from Two Centuries of African-American Cooking ($35); order it from the AALBC.

“‘Cookbook’ fails to adequately describe Jubilee, which won a James Beard Foundation Book Award this year. Jubilee is a wonderfully curated collection of recipes spanning hundreds of years and reflecting influences from Africa and the African Diaspora. The book also dispels the myth that soul food is based upon cooks making do with scraps. Tipton-Martin shares recipes that demonstrate a long history of culinary excellence at the highest level and its significant contribution to American cuisine.” —Troy Johnson, founder of the African American Literature Book Club

Buy It: Afro-Vegan: Farm-Fresh African, Caribbean, and Southern Flavors Remix ($27.50); order it from the AALBC or Sister’s Uptown Bookstore.

“Vegan cuisine is not just for vegans. If you enjoy great-tasting food, this award-winning book is for you! Terry brings us recipes that are not just about creating dishes without meat and animal products. Instead, Afro-Vegan focuses on helping us to enjoy locally grown, in-season, and fresh food. These dishes not only taste great but are healthier for our bodies and our planet.” —Troy Johnson, founder of the African American Literature Book Club

“We love how Bryant Terry remixes classic dishes, flavors, and ingredients of the African Diaspora, and creates delicious new recipe combinations that appeal to vegans, vegetarians, and omnivores alike. But it's not just a cookbook; it takes you on an international food journey. The recipes are accompanied by rich anecdotes and memories from Terry's travels across the African continent, historical references, and insights about building community around food—it even suggests music tracks!” —Janifer Wilson, founder and president of Sister's Uptown Bookstore (New York, NY)

Sweetie Pie’s Cookbook: Soulful Southern Recipes, from My Family to Yours, by Robbie Montgomery

Buy It: Sweetie Pie's Cookbook: Soulful Southern Recipes, from My Family to Yours ($33); order it from Sister’s Uptown Bookstore.

“Bryant Terry is based in Oakland, [which is] not too far away from our Sacramento store. His recipes keep the traditions and flavors of the best soul food but reimagined as vegan delights. Each recipe includes a ‘soundtrack’ (or a song lyric) and a wonderful preface about its origins. You may be tempted just to read a couple of pages each night before you go to bed, but I can’t promise these recipes won’t inspire you to leave your warm bed and head straight to the kitchen—even late at night!” —Georgia “Mother Rose” West, owner and manager of Underground Books (Sacramento, CA)