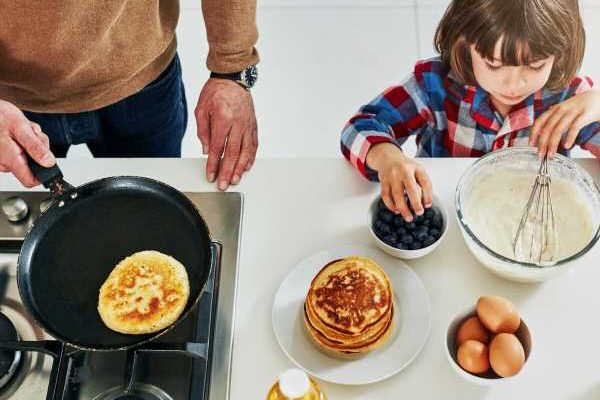 At this point, you probably feel like Wonder Woman or Poison Ivy, or likely some volatile mix of the two. You wake with great hopes of dominating today’s homeschool lesson as basically any Julie Andrews character ever, and go to bed weighed with the guilt of the things you could have done better… like an Ursula who’s lost her mojo. You’re so deep in this flaming nightmare of checklists, Zoom calls, and digital uploads that it’s really difficult to see the stuff you’re teaching your kids without even realizing it. Trust me, mama. You’re doing better than you think. Here are 5 lessons your kids are learning in your kitchen right now just by baking one loaf of banana bread.

Forget fighting over new math verses carry the one, your kiddo is picking up actual, real math. You need two cups of pancake mix but only have ¼ cup measure? Welcome to fractions. My first grader now gets that it takes four ¼ cups to make one whole cup. I’ve found this lesson works particularly well when adding chocolate chips to the banana bread.

My sourdough banana bread recipe is one passed from friend to friend so many times that someone’s hand is physically captured on the copy I have, so I didn’t have a ton of faith in the measurements. Sure enough, six cups of flour was impossibly wrong. The next time I went by weight and nailed it, and also took the time to explain the kitchen scale, zeroing out, and grams, to my assistant chef. This may have also led to a wine-fueled discussion on the metric system versus whatever the hell we use. (My editor tells me its U.S. Customary Units.)

The kids are seeing me prep food more than ever. Gone are the days of long Sundays preparing a marathon of meals; I’m now home enough to cook every day, so they’re watching me rinse containers, check recycling numbers to see what’s compatible with our local program, and note the almost-rotten bananas that inspired this whole math baking lesson in the first case. They’re forming opinions about the fact that our area doesn’t recycle glass and realizing that just because the yucky bananas don’t work on their cereal, doesn’t mean they’re not absolutely perfect for mashing as the recipe calls for.

WATCH: How to Make Ice Cream In a Bag

Stay with me. This sounds crazy, but it’s real. My kids LOVE to start kitchen projects. Yes to cookies! Yes to brownies! Yes to fighting to the death over who stirs first. But two whisks in and wow, this is hard… Well, tough. Now I’ve got all the time in the world to help you see this through. How many stirs do you think it will take until we can’t see anymore egg? Let’s take turns; I’ll stir ten then you stir ten. Were we right? Were we wrong? What’s our new guess? Normally I prefer my banana bread with fresh cream but I’ll take it with a side of scientific method, too.

Whether you’re baking the banana bread for your family, for a neighbor, or your mailman (disclaimer: You need to know your mailman real well to think they’re accepting your homemade baked goods right now), you’re showing your kids how to think of others and spread joy with things you have in your home. No need for flashy purchases, sparkly gifts, or grand gestures, just as kids love it most when you tune into them, all that’s needed to make a gift special is the thought and intention behind it.

If we come out of this better in any way, I hope it’s that we’re more kind and gracious to ourselves and those around us. And if a little banana bread gets made or a little math gets learned, too, that’s fine by me.