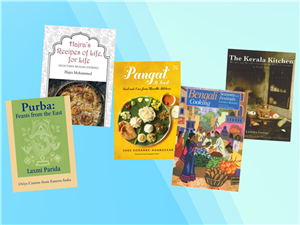 Most people outside of the subcontinent find that their first toehold on Indian food comes from north Indian Punjabi cooking—Tandoori chicken, perhaps, or saag paneer. But that is only a tiny fraction of the extraordinary wealth of food that the country offers. For those willing to loosen their horizons, I've winnowed my way through nearly a hundred cookbooks on India's various cuisines. Here, in no particular order, are the 10 that I saved from the cull; they're the ones I've returned to, over and over again.

If I had to paint this enormous region with one brush, I'd say that the food of India's north-eastern states (Assam, Arunachal Pradesh, Meghalaya, Manipur, Mizoram, Nagaland, Tripura and Sikkim) tend to draw out the essential taste of things, rather than dallying with spice. But within that larger rubric, its filaments diverge vastly. For instance, the tribes of Tripura consider a meal incomplete without the stridency of fermented fish, the Garo tribe of Meghalaya are drawn to chiles, and the Tangkhul Nagas of Manipur are so fond of the pig, that they cook it in an earthen pot built only for pork dishes. Hauzel's book is robust with such detail, bringing nuance to cuisines that have been largely muscled out of view of the Indian foodscape.

Hajra’s Recipes of Life, for Life by Hajra Mohammed

Hajra Mohammed's Hajra's Recipes of Life for Life was the first book to spur my interest in the food of the Kutchi Memoni community; like many, my ideas of Muslim cuisine were fenced in by stereotype—meaty, heavy food like biryani, and kebabs perhaps.Mohammed's book has a whole section on biryani. But then it spiders away from the familiar with recipes such as matkulai, a brothy meat and vegetable dish with rice flour dumpling, a baghare baingan (undergirded by cumin-fenugreek pounded into a powder, which Mohammed calls "the guardian of our door to paradise" in the introduction to her book), and dalcha, gram and gourd with a prickle of tamarind running through it.

Banerji, the doyenne of Bengali food, blurs borderlands by condensing the food habits of West and East Bengal (Bangladesh) into Bengali Cooking: Seasons and Festivals. As a consequence, it is easy to see the flavors of each region spill into the other; a deepening love for rice and fish, the blaze of mustard snaking through their gravies, and of course "no other region in India has shown such passionate absorption in (milk) sweets and appreciation of subtlety or variety in their preparation," writes Banerji. The recipes are chunked into paragraphs, a stylistic choice that speaks perhaps to the book's wider scope, as memoir but also as a text of anthropology.

The Pondicherry Kitchen by Lourdes Tirouvanziam-Louis

After 300 years of being subsumed under colonial rule, the cuisine of Pondicherry (a sea-skirting town in the southern state of Tamil Nadu) has found some kinship with French food. In The Pondicherry Kitchen, the skeleton of recipes is Tamilian, but it is veined through with Francophile influences, such as in the recipe for Ragout (disrupted of course, by the presence of ghee), and the Meen (fish) Puyabaisse, a Pondicherry version of the bouillabaisse.

Book of Rachel by Esther David

The Bene Israel Jews stand at a point of tangency, purportedly a lost tribe of Israel shipwrecked on the Maharashtrian coast 2,200 years ago, now subsumed by the culture of the state. David's book (about elderly Rachel coaxing a shrinking community into saving her beloved but etiolated synagogue) is fiction but it is crosshatched with recipes. Many of these are kissing cousins of Maharashtrian food made by the upper caste Hindus of the state, but others are more incongruous (and therefore interesting). Flame-roasted tongue served as an accompaniment to curry and rice, for instance, or chik cha halwa, a sweetmeat drawn from wheat extract, coconut, almond and sugar.

The Kerala Kitchen: Recipes and Recollections from the Syrian Christians of South India by Lathika George

Within the kitchens of Kerala lies tremendous diversity—Mappilah Muslim food for one, Syrian Christian cooking, for another. The Kerala Kitchen, written by Lathika George, a Syrian Christian herself, is a battle cry against the flattening of the foods of the state. The book is vivid with stories of the author's life, adding flesh to the bones of recipes as diverse as Kallappam (toddy-infused pancakes, usually the supporting act to stews or curries), Kothiyerachiyum Kezhangu Olathiathu (fried ground beef and potato), and Kallumekka Achaar (a vinegar-soaked pickle made of mussels).

Purba: Feasts from the East: Oriya Cuisine from Eastern India by Laxmi Parida

In the jostle for recognition, Odia cuisine (from the state of Odisha) has been largely eclipsed by the food from its neighbouring state of Bengal. Purba is Parida's attempt at righting the balance. Into her book, she has corralled a wealth of recipes under the subheads Oriya Pantry, Jalakhia (breakfast dishes), Breads, Pitha (Cakes), Bhata (Rice), Entrees, Sun Drying (pickles and such), Mitha (sweet dishes) and East meets Far East.

Pangat, a Feast: Food and Lore from Marathi Kitchens by Saee Koranne-Khandekar

Pangat is an excellent shoehorn into Maharashtrian cuisine. Saee Koranne-Khandekar writes with almost sophomoric reverence of the many, many communities that people the enormous state of Maharashtra. Her book yokes together a collection of contraries—for instance, the Pathare Prabhu community uses barely any coconut, while Koknastha Brahmin food is thick with it. Koranne-Khandekar also touches briefly on oft-overlooked tribal communities, lamenting that "the food of the tribals has suffered from much stigma, arising primarily from casteist intolerance, and not enough is known about their frugal yet environmentally conscious cooking." A pity, since "they are the true keepers of our food wisdom."

Like most food cultures, the boundary lines drawn round Parsi cuisine are porous—it owes fealty to pre-Muslim Iran (a predilection for dried fruits and nuts, rose water, pomegranate, saffron, and love of sour-sweet meat dishes), to Gujarat, to the Konkan region of Maharashtra, to Goa, even to British and Dutch food. The cuisine is usually headlined by dhansak, but the reader may find more interesting the ways in which the meat-loving community bolsters its vegetables with egg or meat, and uses nose to tail cooking (well before it was purloined by fancy restaurant kitchens). Consequently, you will find recipes for spiced liver, bheja na cutlet (cutlets fashioned with brain), masala-smeared kidney and kharia ni jelly (a jelly made with goat trotters).

The Weave of My Life: A Dalit Woman’s Memoirs by Urmila Pawar (translated by Maya Pandit)

This isn't a recipe book, nor even a book about food, but food winds its way into every part of it. The Dalit community is vast and multifarious and consistently oppressed and undervalued. Pawar, an accomplished writer of Marathi books, writes frankly about her life, helping to redress this imbalance, and opening up space (among much, much else) to talk about inequality, in food and elsewhere. For instance, these lines about a family wooing the author's elder sister: "They somehow managed to buy a little rice, which they would cook in a big mud pot and serve with some watery soup. This was served to the men first, in one big common dish."