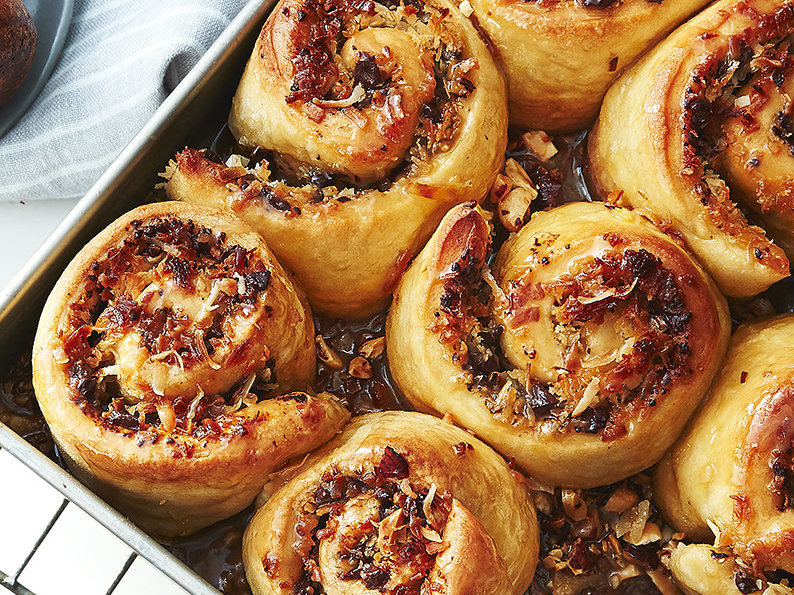 Both sticky buns and cinnamon rolls are filled with cinnamon-sugar and baked into fluffy, golden perfection. But there are a few key differences between the two sweet treats. In honor of National Sticky Bun Day, we’ve broken it down for you—and included our favorite sticky bun and cinnamon roll recipes.

Though they both send sweet smells of cinnamon wafting through our kitchen, there is a difference between sticky buns and cinnamon rolls. To celebrate National Sticky Bun Day (Feb. 21), we’re here to explain what exactly is a sticky bun—and sharing our favorite recipes.

The process of making sticky buns begins with a caramel glaze, which gives the buns their name. The glaze is poured into the baking dish first, followed by toasted pecans. The buns are placed atop the sticky mixture, and after baking, the pan is inverted so that the glaze is on top. The sweetener in the glaze varies—you’ll often see granulated sugar, brown sugar, corn syrup, maple syrup, or a combination. (If honey is used, the bun becomes a honey bun). Though pecans are the most traditional nut, we’re not opposed to walnuts or almonds.

Unlike sticky buns, cinnamon rolls are placed directly into a baking dish, and a cream cheese glaze is drizzled on top after baking. Typically, cinnamon rolls do not contain nuts. For tips on how to perfect them, check out our comprehensive guide to cinnamon rolls.

The buns’ similarities lie in the dough. Both are made with a yeasted dough that is patted into a rectangle, sprinkled with cinnamon-sugar (and, in the case of a sticky bun, more pecans), rolled into a log, and sliced into rolls. Both also require two rises: a first rise after the dough is made, and a second after the rolls have been formed.

Of course, there’s nothing wrong with taking a shortcut to get morning buns on the table ASAP. Our Chocolate-Coconut-Almond Sticky Buns start with pizza dough, and our World’s Easiest Cinnamon Rolls take advantage of store-bought puff pastry. If you’re a savory morning person, opt for our Kabocha Squash Sticky Buns, which begin with a can of crescent roll dough.