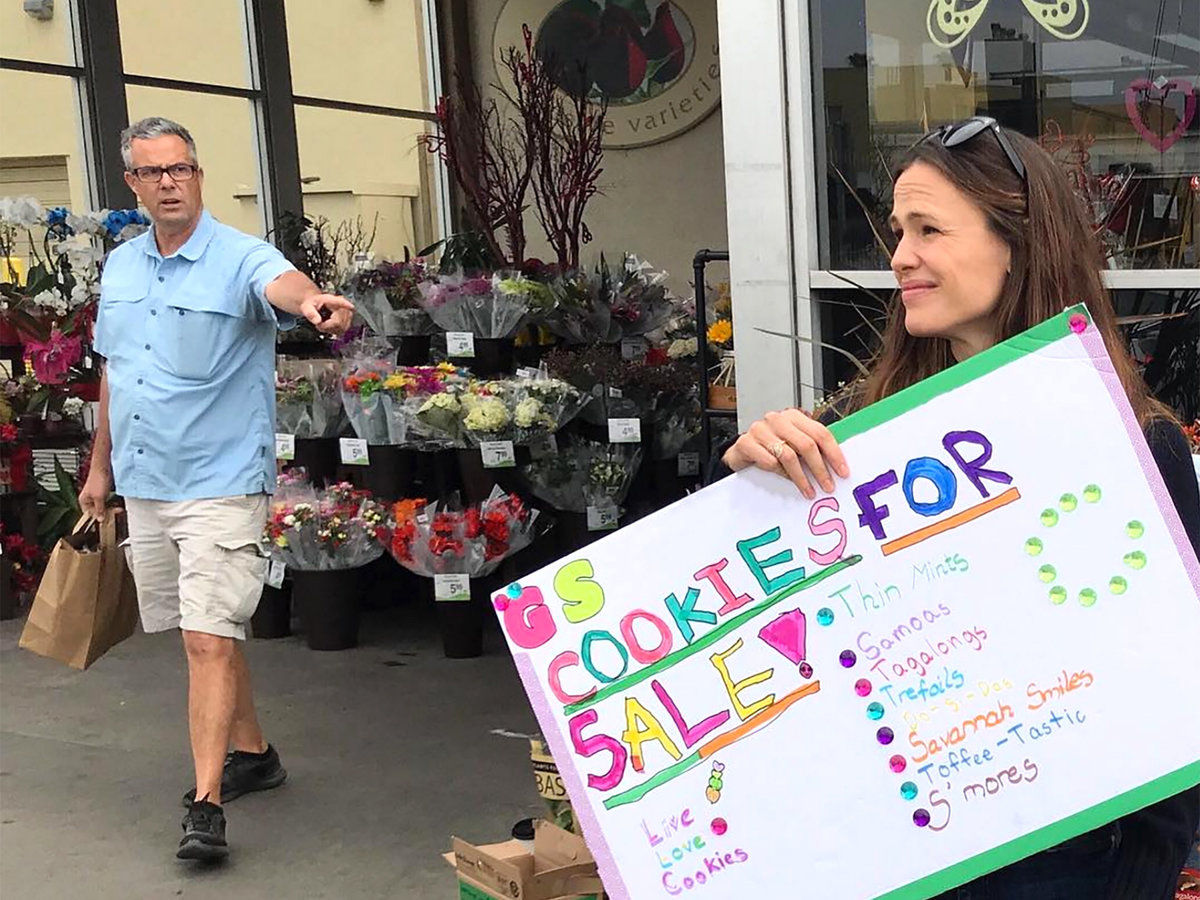 One troop has a secret weapon when it comes to selling boxes of Girl Scout Cookies: Jennifer Garner!

The actress — who is mom to Violet, 12, Seraphina, 9, and Samuel, 5 — revealed that she spends her weekends like many other parents this time of year, posting a photo of herself pushing the popular cookies outside of a grocery store.

“Why yes, kind sir, we do have Thin Mints,” she captioned a candid snap on Instagram, in which she held a homemade sign advertising the treats. She also added the hashtags “#tistheseason,” “#comeandgetem” and “#whodoesntloveagirlscout.”

After selling the cookies outside the grocery store, Garner took to her Instagram story to announce she would be sending boxes to a few of her followers. “While my Girl Scout and Brownie have to sell their own cookies, I did buy a limited number of boxes from them to share with you guys,” she said. “So if you truly have no Girl Scout in your life, please send me your order and your address and I will try to hook you up.” (Unsurprisingly, she sold out of the boxes in mere minutes.)

In 2016, Garner revealed that she’s a true cookie salesperson at heart during an appearance on Live with Kelly and Michael.

“I’m the one telling the girls, you know, ‘Try to talk about the gluten free because they’re a dollar more.’ Let’s have an upsell!” she said.

The star also shared that she went through “intense” training to become a scout group leader, but when it comes to selling cookies, most buyers aren’t phased by the fact that the celebrity is there.

“Nobody cares,” she said. “I’m just there with the troop.”

A young California Girl Scout recently made headlines when she posted up shop outside a marijuana dispensary in San Diego, selling more than 300 boxes of the famous cookies in just six hours, Fox 4 reported.

The dispensary, called Urbn Leaf, shared a photo of the Girl Scout posing in front of the dispensary holding a stack of cookie boxes while wearing her uniform and Samoa glasses.

“Get some Girl Scout Cookies with your GSC today until 4pm! Have a friend that wants to #tagalong? Bring them with – shopping is more fun with friends anyways,” the post said.

Get some Girl Scout Cookies with your GSC today until 4pm! ?? Have a friend that wants to #tagalong? Bring them with – shopping is more fun with friends anyways. ???

The chief communications officer from Girl Scouts of the USA Kelly Parisi told the Los Angeles Times that each region of Girl Scouts has its own guidelines.

“All the money stays in local councils, and they make all decisions on how the cookie program is run,” said Parisi in a statement. “As always, our primary concern is the safety and well-being of the girls we serve. Volunteers and parents are empowered to relocate their booths if conditions change and the location is no longer suitable.”