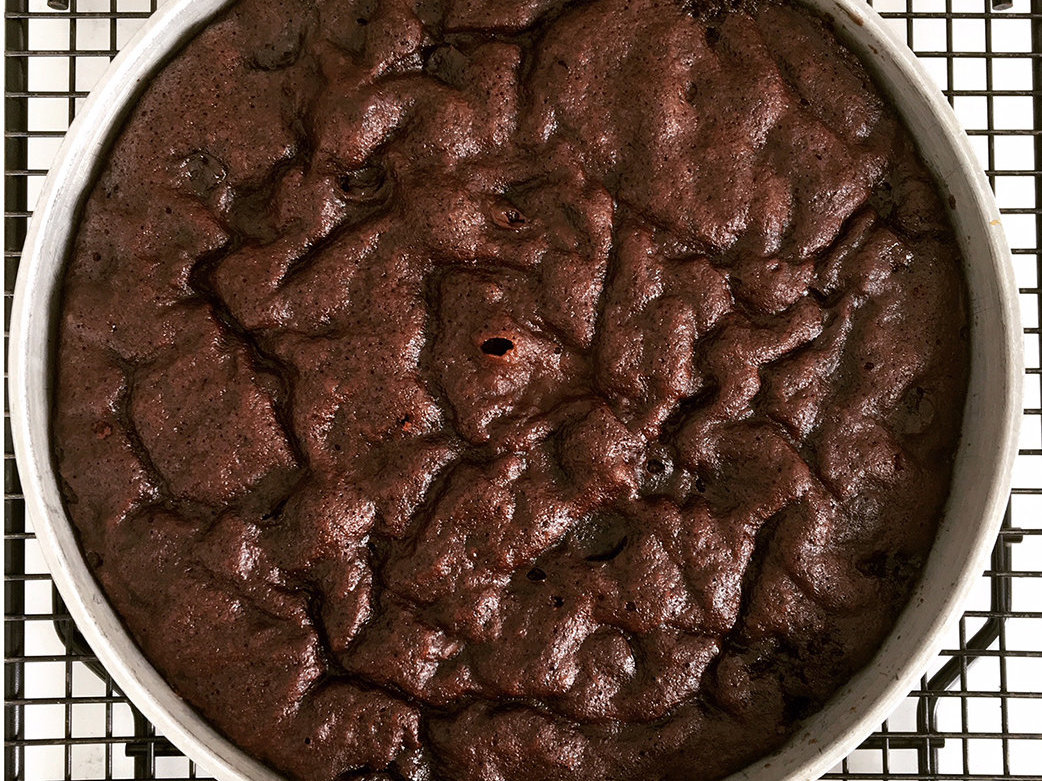 The power had been out for three days, and I wanted brownies. Homemade brownies. As soon as possible. It was all I could think about (possibly a subconscious effort to distract myself from the 53-degree temperatures in my living room). If I could just have brownies, then the nor’easter wouldn’t have won. (Lack of electricity notwithstanding.)

The thing is, I have an electric wall oven. A double, in fact—which is doubly useless in a power outage. So I channeled my mother, who once baked a chocolate cake from scratch on our outdoor barbecue grill in the aftermath of a hurricane, and got thinking. What would Mom do? I had a gas cooktop—that had to be good for something. (My own grill, sadly, was in the back of the yard, buried in 10-inch deep snow drifts.)

I googled “cast iron skillet brownies.” Got a few results, but none looked appetizing, and nearly all were brownie hybrids. I wanted the real deal. Suddenly, I had a vague memory of reading about steamed English puddings—weren’t they basically cakes? And so, couldn’t I steam my brownies on the stovetop?

My husband thought I was crazy. He suggested brewing some Stress Relief tea to get my mind off brownies. My 8-year-old son doesn’t like brownies, so he wasn’t interested at all. But I was on a mission.

I searched for “stovetop cake” and found a Milk Street recipe. Yes! I felt like I was getting somewhere. The recipe called for rolling aluminum foil into a coil and setting it in the bottom of a dutch oven, adding an inch or two of water to the pot, then resting a cake pan filled with batter on top. Shut the lid, steam the cake—and eat it. Now, I know that brownies and chocolate cake have different textures, but I was willing to bet that the technique would work. (And worst case scenario? Semi-cooked chocolate brownie batter—still a pretty good outcome.)

So I mixed up my favorite recipe, made my foil coil, added water to bottom of my Le Creuset, and nestled a round cake pan filled with brownie batter right in there. Then I turned on the gas, covered my pot, and waited. For their stovetop cake recipe, Milk Street suggested keeping the same cook time as in the original recipe, so I did the same. And 30 or so minutes later, I opened the lid to…steam-cooked brownies!

Naturally I couldn’t wait for them to cool. Removing the pan from the dutch oven was tricky, so I used kitchen tongs on one side and a spatula on the other to life it from the hot pot. Then I grabbed a knife and dug in.

The first brownie—still very warm from the cooking—had a lighter, fluffier texture than my brownies usually do. I chalked it up to the extra moisture from steaming. Later, once they had a chance to cool, the brownies took on a much fudgier texture. Both ways were incredibly delicious and completely hit the spot.

Next nor’easter, I won’t be afraid of a power outage. Not as long as I have the necessary ingredients for steamed Blackout Brownies, and a match with which to light a gas burner on my range. Bring it, Mother Nature!