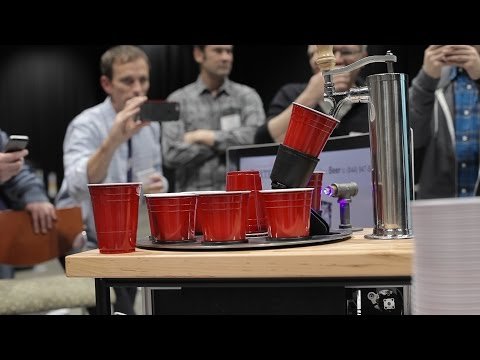 Nobody likes waiting in line to get a drink, even if it is an open bar. In a perfect world, there would always be a beer waiting for you as soon as you finished the previous one. Well, fret no more, that world is here thanks to text messaging service Zipwhip’s Texterator. The automatic beer keg tap allows party guests to text their order of a beer to the robotic device by simply typing “beer” to hold their place in queue for a fresh pour. The beer-bot is outfitted with a carousel of red cups allowing up to eight brews-in-waiting to be ready for their intended consumer.

Related: THIS ROBOT WILL DO SHOTS WITH YOU

But how to know which beer is yours? That’s where the laser comes in. Oh, did I not mention there was a laser? There’s a laser. It etches the last four digits of your phone number onto the side of the cup, making sure you know that beer is uniquely your own. Right now the robot is just a prototype, but enterprising beer lovers never fear: Zipwhip has made the source code available for you to build your very own. Suffice to say, this is a pretty cool party hack, but we’re still probably a few years away from a robot that can help you do keg stand.