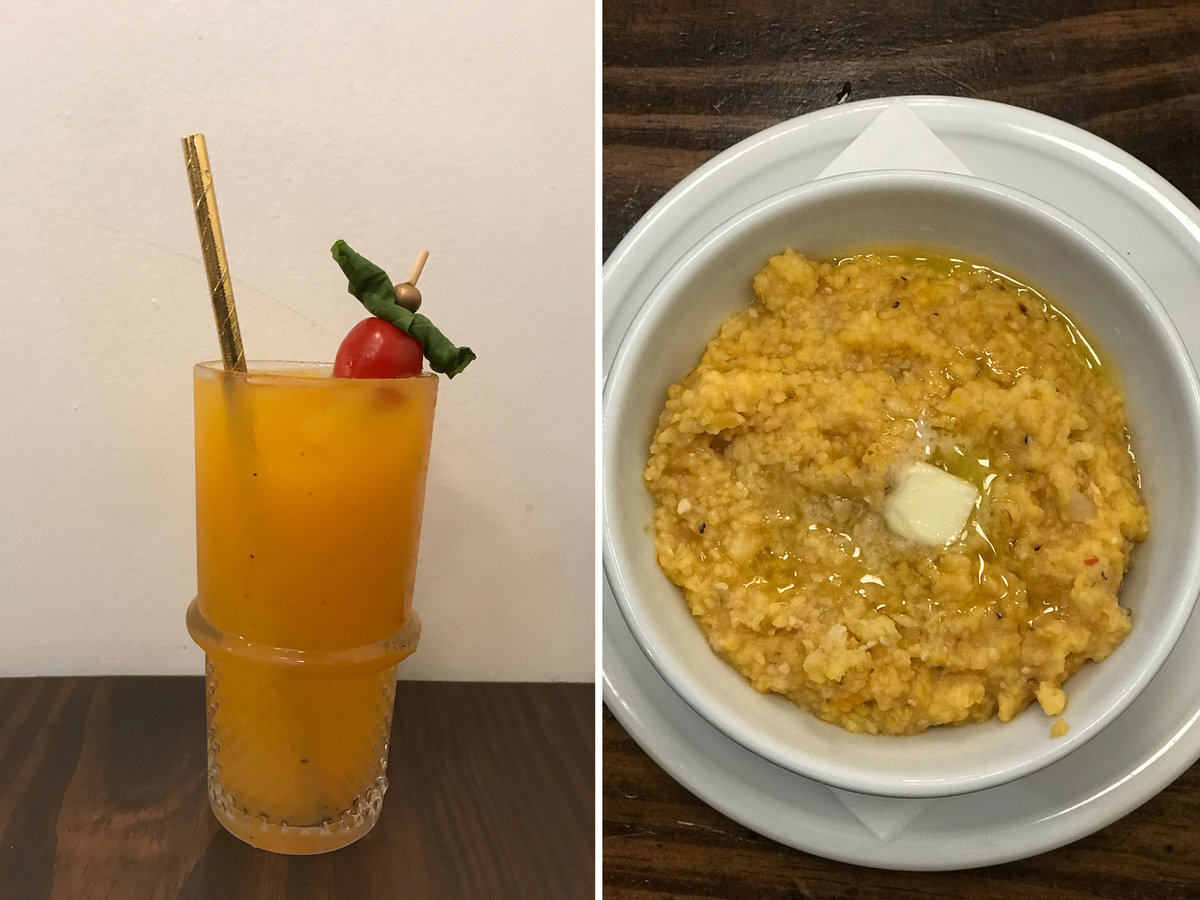 I went to Millers All Day, a brunch-focused restaurant in Charleston, South Carolina, for one thing: Unicorn Grits. Yep. Unicorn grits are colored pink naturally by a red corn and make a solid base for all the breakfast things—or if you’re a true Southerner at heart, they need nothing more than a pinch of salt and a thick square of butter. But in the end, it was their bloody mary crafted from vodka that’s distilled from grits that really caught my attention.

Greg Johnsman, co-owner of Millers and Geechie Boy Mill (an antique mill producing hand-milled grits), uses the space as an educational tool to teach hungry diners about his products by way of mouthwatering dishes, including several different types of grits. Truth be told, there’s a lot more to grits than most people are aware of.

The nearly extinct Guinea Flint Grits, brought back to life by Johnsman, are also a hot commodity to grits-lovers like me. Johnsman says that the corn is a “form of the classic small cob short season yellow-orange Cuban Flint corn that spread from that island from the early 1500’s into the American Southeast in pre-colonial times. I started with a handful of seeds from Sean Brock and planted for almost seven years to get a large enough seed stock to put back on the market.”

The Guinea Flint heirloom strain is a far cry from any other grits, especially the cringeworthy instant stuff that non-Southerners associate with the dish. The Guinea Flint is coarse and gritty and slightly sweet, with a texture that eats almost like polenta. “We submitted it to the Fancy Food Show, and in a blind taste test it was picked over every product from around the world in the grain rice and pasta category,” Johnsman says.

My mother aways says I was high maintenance as a child—I demanded a hot breakfast of grits before school. The thought of drinking them out of a cup has definitely crossed my mind before, so imagine my excitement when I discovered the grit bloody mary on the Millers All Day cocktail list. It’s not what you’re thinking. You’re not actually drinking grits in a cocktail. It’s smooth and grit-like in all the right ways.

“It was a project first started with Cannon Distillery when they wanted to do a locally sourced grain,” Johnsman says. “I told them my background in milling was to make shine and they thought the twist on making vodka would be great. When Millers All Day opened, my attention was and is to use as many locally sourced products and we thought using the grits vodka would only elevate and show how all my products are used.”

The Golden Bloody Mary is a photogenic, bright yellow bloody that packs a flavorful punch. “I wanted to showcase all of Greg’s products that I possibly could,” bar manager Davey Jones says. Made from scratch, Jones crafts the mix using yellow tomatoes, roasted peppers and corn, juiced in-house. “The corn juice gives it a little more of a creamy texture than our other bloody marys,” he adds. And when mixed with vodka, distilled from Johnsman’s grits, the outcome is a slightly grainy, vibrant brunch libation that pairs well with everything on the menu.

If you’re a true grits fanatic, you’ll order the shrimp and grits bowl and the cornmeal pancakes, too. Beware, the Golden Bloody goes down much easier than the original tomato juice version, but it’s still super potent.